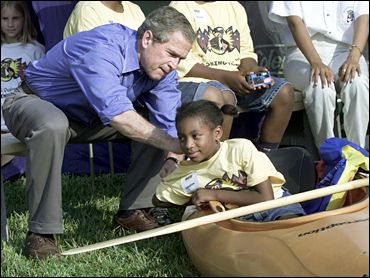 President Bush urged Americans on Thursday to make themselves and their nation healthier through exercise, proper diet and regular checkups.

"The evidence is clear: A healthier America is a stronger America," the president said while kicking off a four-day fitness campaign

Overseeing an exercise fair under way in the backyard of the White House, Mr. Bush said poor health weakens the nation through the high cost of fighting disease and illness. The nation spends $183 billion to fight heart disease alone, a figure that could be trimmed along with waistlines, he said.

"Better health is an individual responsibility and an important national goal," the president said.

Outlined in a 16-page, red-white-and-blue booklet, his HealthierUs initiative calls for at least a half-hour of exercise every day for adults and more for children; eating smaller portions of more nutritious foods; regular preventive health screenings; and avoidance of any risky behaviors, especially involving alcohol, tobacco and illegal drugs.

"We're trying to encourage all Americans to get off the couch," Mrs. Bush said. "Get some exercise, it really makes a huge difference in your lifestyle."

Mrs. Bush said she was especially concerned about studies that show American children are eating fattier foods and exercising less than previous generations.

"American children are more obese than they have ever been," she said. "It's really up to the adults around them who prepare their meals to make sure they give them healthy foods."

Mr. Bush also urged Americans to take walks, play with their kids in their yards and engage in various other exercise. Cancer deaths could be cut by one-third if people changed their diets and exercised, he said.

"When it comes to your health, even little steps can make a difference," he said.

The booklet's recommendations include merely using a push mower on the lawn instead of the riding type, exercising portion control at mealtime, getting a flu shot and hand-washing regularly.

The backdrop for Mr. Bush's announcement was a fitness expo that took over the expansive South Lawn. Workers — briefly interrupted by an evacuation of the executive mansion Wednesday night — had turned the area into essentially a large outdoor gym and recreation area.

About 1,500 visitors — White House staff and their families, senior citizens and children from schools, summer camps, clubs and Special Olympics organizations — had their pick of informational booths offering everything from body-mass-index assessments to diabetes screenings to nutritional advice.

Mr. Bush was also introducing 20 new members of the President's Council on Physical Fitness and Sports, chaired by NFL Hall of Famer Lynn Swann and vice-chaired by Dot Richardson, a member of the gold-medal winning U.S. softball team. He also was signing an order directing all relevant federal agencies to suggest new ways they could help Americans live healthier lives.

On Friday in Orlando, Fla., Mr. Bush will promote "age-appropriate" exercise, capped by a workout with willing participants from a local senior center.

On Saturday, about 400 Bush employees are joining the president in a 3-mile race at nearby Fort McNair. First lady Laura Bush will lead walkers on a 1.5-mile route around the military post.

Finally, the presidential focus on fitness will end Sunday with more T-ball on the White House lawn.

The campaign was designed in the hope that the bully pulpit of the White House would provide the right dose of inspiration to the half of American adults who say they do not exercise at all. Alarmed at rising child obesity rates — and heartened by the benefits to families of group outings to the outdoors — the White House is eager to see Americans emulate their fitness-buff president, who runs three miles nearly every day.