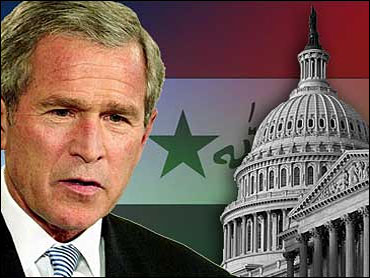 The president has vetoed the Democrats' supplemental-spending bill for Iraq and Afghanistan, promptly and rightly.

The bill would — as Bush said in a speech after the veto — "set a deadline for failure" in Iraq. By requiring troops to begin withdrawing as soon as 90 days from now, it would destroy Gen. David Petraeus' strategy — centered on the troop surge — even as it begins to show a few signs of success. It would remove the most important force for stability in Iraq, us, and shift power toward Iraq's nastiest political players. It would convince al Qaeda that its terror campaign has succeeded in destroying the American will to win. The probable outcome of all this would be a nadir of U.S. influence worldwide and an emboldened jihad against the West.

Democrats think Iraq is already lost, but refuse — outside of Harry Reid's unguarded moments — to admit this forthrightly. Instead they speak nonsense about supporting the troops and fighting al Qaeda in Iraq "from a distance."

We doubt even Reid knows what he means when he speaks of fighting from a distance, but the idea is ludicrous. Consider Anbar Province. The stunning but fragile recent progress there is a result of Sunni tribes' turning against al Qaeda, confident that they have the U.S. military at their back. Our troops have been clearing and holding in places like Ramadi — something the tribes aren't capable of doing on their own. Likewise, political allegiances have a chance of shifting toward the Iraqi central government only if it is capable of providing security. A U.S. pullout would make that impossible.

After Mr. Bush's veto, Democrats are scrambling to come up with Plan B. They should think fast. During this interlude without the supplemental spending, the Pentagon has been able to keep paying for the war by reallocating money, but it cannot order some new equipment and weapons or make long-term plans for Iraq and Afghanistan, until the Democrats send Bush an acceptable version of the bill. For example, the military needs 7,700 new armored vehicles. It ordered 4,100 of them in January, but the rest are tied to the allocation of new funds.

Rep. John Murtha has floated the idea of passing a short-term-funding bill to tide the military over for only two months. This would put commanders in the position of planning for operations without knowing whether the money for them will run out in a matter of weeks. It would also have the potential to further disrupt funding for maintenance and training. Regardless, any supplemental-spending bill would end with the fiscal year in October, an already-short timeframe. Other, more responsible Democratic leaders have been throwing cold water on Murtha's proposal.

Then there are the benchmarks. Setting hortatory goals for the Iraqi government is fine, since everyone knows what it ideally should do, including pass an oil-sharing law and set local elections so that the Sunnis who boycotted them in 2005 can get an official seat at the table in provinces such as Anbar. But making the benchmarks binding is likely only to get Shiite backs up at a time when they are already being asked to make difficult concessions in the face of a horrific round of suicide bombings. It would deny flexibility to Ambassador Ryan Crocker, and potentially cut off the resources we need to help stabilize the government so that it feels secure enough to take hard political steps.

In short, Democrats should send Bush a supplemental without measures to hobble our effort, and they should send it as soon as possible. This will be painful for them, but so be it. They strive to control the war's prosecution only to hasten its end — and if they have their way, that end will be an ignominy.