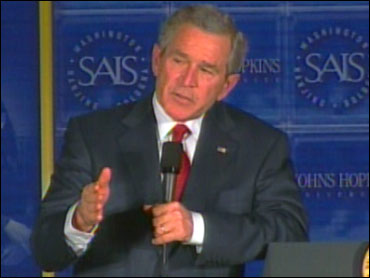 "I'm the decider, and I decide what's best," said the president.

No, he wasn't having a tantrum about the rules of a kickball game. It just sounds that way.

He was talking about who gets to be on his team. Donald Rumsfeld gets to stay on Little George's (his mom made that up, not me, so don't get all bent out of shape) team. 'Cuz, "I'm the decider."

Karl Rove gets to stay on the team, too — but he has to play a new position in the outfield. He doesn't get to play with policy anymore, just elections. "I decide what's best."

A lot of Bush's detractors think Rove decides a lot of stuff for the president. Some wise guys once wrote a book about Rove and called it "Bush's Brain."

If that were true, we'd be in a pickle. If Bush is "The Decider," then Rove can't be his brain. Nor can he be the tool of Dick Cheney. He can't even be a patsy for Don Rumsfeld or Big Oil.

If the president is "The Decider," then it really doesn't matter that Rove has a new position. It doesn't even matter if Secretary of Defense Rumsfeld quits. They don't get to decide what's best, The Decider does.

Bush's detractors want it both ways, and that's not fair.

They want President Bush to be "The Decider" when it comes to getting blamed for problems and bad things like war, pollution, hurricanes, poverty, Harriet Miers and bad customer service at Walgreen's.

But they also want President Bush to be the puppet of manipulative Rasputins like Rove, Rumsfeld, Cheney and Halliburton — and as we know, you can't have it both ways. That's a rule. Like gravity and stuff.

I believe the president is The Decider.

But I also know that it's really hard — no, impossible — for many people to believe that a real decider can say things like, "I'm the decider and I decide what's best." They cannot and will not ever believe that a man who talks like that is smart, in control and heavy.

I admit that I do find it hard to understand how a man who has such childish syntax can be so successful and powerful.

But I think he is. I definitely don't think he's a puppet. I think he's extremely smart and very wily. In elections, he beats people who think he's dumb. I think he has a superior memory and people sense. I sense that he has big ideas about the world and the country, even if I've never heard him talk about those ideas articulately or think that his policies and actions consistent, well-informed or sensible.

I think he's The Decider. I don't think it matters what job, title or office Karl Rove has, because the president will always listen to him and have a relationship with him and then "decide what's best." There's no point in reading tea leaves about Rove and Rumsfeld, because this president is not going to alter his administration, his outlook or his policies in ways that will matter for the country.

But since I think President Bush is The Decider, I think he is responsible for what happens on his watch. A war and many, many horrible deaths. Ignoring Darfur. Ignoring deficits and finances that will put insane tax burdens on our children. Ignoring the environment. Intentionally increasing the gap between rich and poor in our country. Not catching Osama bin Laden.

I don't think The Decider-in-Chief takes responsibility for tough things in a grown-up, manly way that sets a good example.

And that's not really fair either. You can't be "The Decider" just for the good stuff.

This column is over. I call it.

Dick Meyer is the Editorial Director of CBSNews.com.