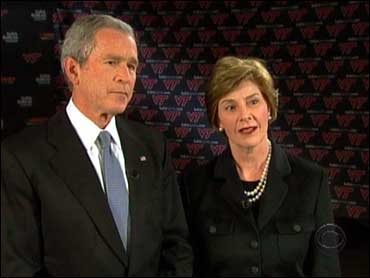 The money will help impoverished children living in the United States and Africa.

"We thank 'American Idol' viewers who have shown the good heart of America," the president said, in a taped appearance. "We thank all the celebrities who participated, including Bono, and all the contestants who sang their hearts out for these children."

He then turned to the first lady and asked: "Say Laura, you think I ought to sing something?"

The joke referred to Bush's appearance with a West African dance troupe to mark Malaria Awareness Day last week. After taking to the stage, he pounded on the drums enthusiastically and led a group of colorfully dressed dancers and drummers in a little dance.

The scene was shown repeatedly televised on cable news networks and was the talk of late-night comedy shows.