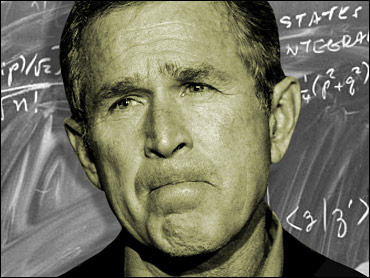 In a presidential debate nearly four years ago, George W. Bush accused Al Gore of employing "fuzzy math." But increasingly, it's the White House that's being accused of numerical fuzziness on Medicare, the deficit and jobs.

In his State of the Union address, the president pledged to halve the deficit by 2009. But his plan largely excludes the cost of operations in Iraq and Afghanistan and does not reflect the long-term impact of Mr. Bush's proposal to make recent tax cuts permanent.

And most recently, White House officials backed off a projection in the president's annual economic report that the U.S. economy would generate 2.6 million new jobs this year.

There's often debate in Washington over numbers, and past administrations have also been accused of fudging it. But the Bush team's math seems unusually sloppy to some long-time observers.

"I have to say, the budget gimmicks this year are so transparent and so obvious, I think they stunned even Republicans," said Robert Bixby, executive director of the Concord Coalition, a nonpartisan group that advocates fiscal responsibility.

"Usually you have to dig a little bit deeper to find sort of subtle gimmicks," he said. "There's nothing subtle about these: They just decided to leave a lot of big items out."

Numbers have always been key to Mr. Bush's image. He lost the 2000 popular vote by 540,000 votes, but won Florida by 537 ballots. He based his case for war in Iraq partly on 25,000 liters of anthrax for which Iraq allegedly failed to account; they haven't been found.

Now, Democrats may try to use these troublesome numbers to undermine the president's credibility: