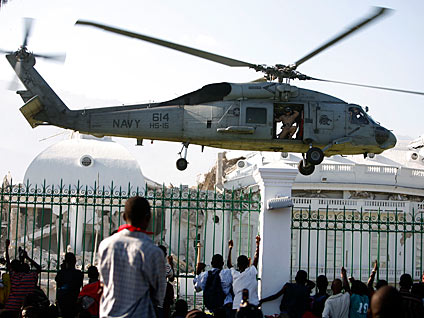 President Bush named John Negroponte, the United States' top diplomat at the United Nations, as the U.S. ambassador to Iraq on Monday and asserted that Iraq "will be free and democratic and peaceful."

At the United Nations, Negroponte, 64, was instrumental in winning unanimous approval of a Security Council resolution that demanded Saddam Hussein comply with U.N. mandates to disarm.

While the resolution helped the Bush administration make its case for invading Iraq, the Security Council eventually refused to endorse the overthrow of Saddam, opting instead to extend U.N. weapons searches.

If confirmed by the Senate, Negroponte would head a U.S. embassy in Baghdad that will be temporarily housed in a palace that belonged to Saddam. When up and running, the embassy will be the largest in the world.

Negroponte would become ambassador in Baghdad when the United States hands over political power to an interim Iraqi government by a June 30 deadline. The current top U.S. official in Iraq, L. Paul Bremer, is expected to leave the country once the political transition is completed.

Thousands of U.S. troops will remain in the country even after the political transition is complete.

As U.N. ambassador in New York, Negroponte also helped win approval of a resolution to expand the mandate of an international security force in Afghanistan after the overthrow of the Taliban governement.

Before that, he worked in private business.

Negroponte's nomination for the U.N. post was confirmed by the Senate in September 2001, but that confirmation didn't come easy.

It was delayed a half-year mostly because of criticism of his record as the U.S. ambassador to Honduras from 1981 to 1985. In Honduras, Negroponte played a prominent role in assisting the Contras in Nicaragua in their war with the left-wing Sandinista government, which was aligned with Cuba and the Soviet Union.

For weeks before his Senate Foreign Relations Committee hearing, Negroponte was questioned by staff members on whether he had acquiesced to human rights abuses by a Honduran death squad funded and partly trained by the Central Intelligence Agency.

Negroponte testified that he did not believe the abuses were part of a deliberate Honduran government policy. "To this day," he said, "I do not believe that death squads were operating in Honduras."

"He's trusted, I think, by the administration. He's certainly very close to the secretary of state and he's unflappable," Aronson said in a recent interview.