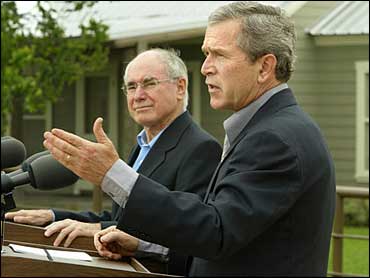 President Bush expressed unshakable confidence Saturday that banned weapons will be found in Iraq and complained that Tariq Aziz, one of Saddam Hussein's closest deputies, is not cooperating with U.S. forces who have him in custody.

The president, at a news conference on his ranch with visiting Australian Prime Minister John Howard, predicted the United States will locate the suspected cache of biological and chemical weapons.

"Iraq's the size of the state of California," he said. "It's got tunnels, caves, all kinds of complexes. We'll find them, and it's just going to be a matter of time to do so."

Aziz surrendered to U.S. forces on April 24, after the collapse of Baghdad. U.S. officials had hoped that Aziz, who made Saddam's case before the world when Iraq invaded Kuwait in 1990, could provide information about the deposed president's whereabouts and Iraq's weapons. But Mr. Bush said Aziz was not cooperating.

With a growing number of Iraqi leaders in custody, American intelligence agents are able to check one's claims against others, officials said. They said the United States has a growing body of documents that help verify responses from Aziz and other captured leaders.

Mr. Bush expressed confidence that the United States will learn what it needs from lower-ranking officials and ordinary citizens.