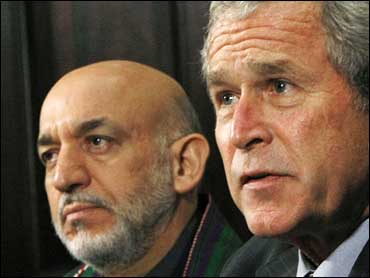 The Bush administration, in the midst of a wide review of its war strategy in Afghanistan, is likely to recommend soon to the incoming Obama administration that the U.S. push for further expansion of the Afghan army as the surest path to an eventual U.S. withdrawal, The Associated Press has learned.

It's too late in President Bush's tenure for a major change of direction in Afghanistan, but the White House wants to produce a kind of road map for the next administration, not just in terms of military effort but also in other areas such as integrating U.S. and international civilian and military aid.

The strategy review, which began in September amid increasing militant violence and a growing U.S. and allied death toll, is being coordinated at the White House and is expected to be presented by December. Defense officials would discuss emerging conclusions only on condition of anonymity because it is not yet completed.

The Bush administration is likely to endorse fulfilling a standing request by the top U.S. commander in Afghanistan, Gen. David McKiernan, for about 20,000 additional U.S. troops in 2009. But it has concluded that the emphasis increasingly should be on Afghan forces taking the lead.

A chief advocate of focusing more on speeding the training and equipping of a bigger Afghan army is Defense Secretary Robert Gates, who said last week that it represents the long-term answer in Afghanistan.

Gates also has emphasized limiting the depth of U.S. military involvement in a country that has ground down foreign armies over centuries of conflict.

"We will be making a terrible mistake if this ends up being called America's war," Gates said Oct. 31 after presiding at a ceremony in Tampa, Fla., where Gen. David Petraeus was installed as head of U.S. Central Command, whose area of responsibility includes Afghanistan as well as Iraq.

"What I would like to see, and, I think, what everybody would like to see, is the most rapid possible further expansion of the Afghan military forces because this needs to be an Afghan war, not an American war and not a NATO war," Gates told reporters.

President-elect Obama, who has called Afghanistan an "urgent crisis," said in a speech Oct. 22 that "it's time to heed the call" from McKiernan for more U.S. troops. Obama said he would send at least two or three additional combat brigades. One combat brigade typically has 3,500-4,000 soldiers.

Petraeus is conducting his own review of his command area, including Afghanistan. It is just getting under way and is due to be finished in February, after Obama presumably has his national security team in place.

Adm. Mike Mullen, chairman of the Joint Chiefs of Staff, also is conducting a strategy review focusing on the way ahead in the tribal areas of western Pakistan along the Afghan border, where the Taliban and al Qaeda have established havens from which to launch attacks across the border. Mullen's review is meant to find a strategy for Afghanistan that takes the border issue fully into account.

There are now about 31,000 U.S. troops in Afghanistan. Another brigade is due to arrive in January; beyond that, decisions on the size and timing of any further additions will be up to Obama.

Under a plan adopted by the U.S. and Afghan governments in September, the Afghan army is to grow to 134,000 soldiers by 2014, and it's not yet clear how many more soldiers the Bush administration's review will recommend.

The previous goal was 80,000, and the actual number in uniform now is about 68,000, according to Maj. Gen. Robert Cone, who heads U.S. efforts to train and equip the Afghan security forces. The price tag for getting to the new target of 134,000 is an estimated $17 billion.

In a telephone interview Friday from Kabul, Cone said he and the Afghans have fashioned a plan that would get to the 134,000 goal two years early — by the summer of 2012 — if he can get additional U.S. funding. Other limitations on growing faster include what Cone called "rampant corruption" among the Afghans, as well as a shortage of seasoned and reliable Afghan military professionals.

Cone said some have argued that Afghanistan might need a security force of 400,000-600,000, but there are legitimate questions about whether such a poor country could sustain that force.

"What do the Afghans need, and what can the Afghans afford?" Cone said. "We might make an argument that they need more forces, but I think our point would be that 134,000 by (2012) would be as fast as we can build it responsibly, given the complexity of this environment."

Gates noted there is broad support for getting to the 134,000 goal quickly.

"It may well not stop there," he added, noting that the size of the Afghan security forces is vastly smaller than Iraq's. A rapid increase in the size of Iraqi security forces over the past two years was a key element — along with an altered U.S. counterinsurgency strategy — in drastically reducing the level of violence and opening the door to American troop withdrawals this year.

Barry McCaffrey, a retired four-star Army general, wrote recently after a July visit to Afghanistan that one of the keys to winning in Afghanistan is expanding the Afghan army to 200,000 soldiers.

"Afghanistan will not be solved by the addition of two or three more U.S. combat brigades from our rapidly unraveling Army," McCaffrey wrote in a paper for the U.S. Military Academy at West Point, N.Y.

Gates said he does not expect NATO allies or others to contribute significant additional troops in Afghanistan. In his remarks last week, Gates alluded to a behind-the-scenes debate about the wisdom of deepening U.S. involvement, beyond the extra brigades McKiernan already has requested.

"I think it remains to be seen whether there is a need or value to significantly more troops than that," the defense secretary said.