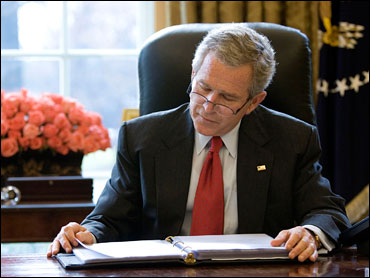 Hampered by huge budget deficits and an unpopular war, President Bush seeks to take charge of the election-year agenda Tuesday by declaring America must break its dependence on Mideast oil and calling for training 70,000 math and science teachers to improve the nation's competitiveness.

Released excerpts of his State of the Union speech show the president saying, "America is addicted to oil" and must break its dependence on foreign suppliers in unstable parts of the world.

Mr. Bush calls for greater federal spending on basic science research and more money for math and science education. The president was to propose training 70,000 teachers to lead advanced math and science classes in high school, said Rep. Sherwood Boehlert, R-N.Y., chairman of the House Science Committee, who was briefed on the speech.

Mr. Bush renews his commitment to the central pledge of his inaugural address. "Our nation is committed to an historic, long-term goal; we seek the end of tyranny in our world," he says. "The future security of America depends on it."

Senior Administration officials say Tuesday's speech will be more like an inaugural address than the usual State of the Union laundry list — an attempt to frame the debate for the mid-term elections and draw sharp contrasts with Democrats, CBS News chief White House correspondent John Roberts reports.

Watch President Bush's speech live on CBSNews.com at 9 p.m. ET.
The president discusses troubles at home and abroad and says the nation needs to strengthen its competitiveness in the global economy. "The American economy is pre-eminent but we cannot afford to be complacent," he says. "In a dynamic world economy, we are seeing new competitors like China and India."

"Our great advantage in the world has always been our educated, hardworking, ambitious people, and we are going to keep that edge," Mr. Bush says.

The stakes couldn't be higher for President Bush. He's had a rough first year of his second term, but tonight he'll use his fifth State of the Union address to garner support from the Republican-controlled Congress and the American people on domestic and foreign initiatives, CBS News senior White House Correspondent Bill Plante reports.

The address has gone through more than 30 drafts and was undergoing final editing at the White House, where Mr. Bush got a morale boost with the confirmation of Judge Samuel Alito to the Supreme Court.

With the war in Iraq about to enter its fourth year and more than 2,240 American troops killed, Mr. Bush says the nation must not falter in what he called the central front in the war on terror.

"In a time of testing, we cannot find security by abandoning our commitments and retreating within our borders," the president says. "If we were to leave these vicious attackers alone, they would not leave us alone. They would simply move the battlefield to our own shores."

"America is addicted to oil, which is often imported from unstable parts of the world," Mr. Bush says. "The best way to break this addiction is through technology."

Oil prices are inching toward $70 a barrel, and the president's goal of reducing dependence on foreign suppliers has been issued by the White House over the decades but never realized. Mr. Bush's primary proposal is to increase federal research into alternative fuels such as ethanol made from weeds or wood chips, instead of corn.

Mr. Bush also pushes for construction of new nuclear power plants and increased use of wind, solar and clean-coal technologies.

On health care, Mr. Bush's says, "Our government has a responsibility to help provide health care for the poor and the elderly, and we are meeting that responsibility. For all Americans, we must confront the rising cost of care ... strengthen the doctor-patient relationship ... and help people afford the insurance coverage they seek."

CBS News has also learned the president will propose expanded tax deductions for medical expenses and health care savings accounts. It's a popular issue: more than 60 percent in the most recent CBS News/New York Times poll (.pdf) say government should guarantee health insurance for all.

This year is most likely the president's last chance to get any major legislation through Congress.

"For a two-term president after the November elections in the middle of your second term, things start going downhill and you really do start quacking like a duck," said David Gergen, a Republican who has served as an adviser to Democratic and GOP presidents.

Missing from the excerpts, Roberts reports, are Social Security and tax reform, the two big initiatives from the 2005 State of the Union. However, the President will likely call on Congress to address the triple threat facing retiring baby boomers: Social Security, Medicare and Medicaid.

The Democrats, meanwhile, are already trying to blunt any political gains Mr. Bush might make from the speech.

House Minority Leader Nancy Pelosi said the president's plan to expand health savings accounts has too many drawbacks. She asserted that the plan will not cut health care costs and will increases the deficit.

The official Democratic response to the president's speech was being delivered by Virginia Gov. Timothy M. Kaine, considered a rising star in the party after winning office last year in a Southern state that went for Mr. Bush in 2004. Democrats hope to replicate his victory in congressional elections.