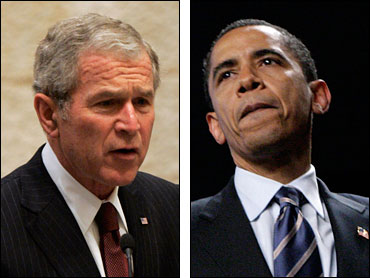 Barack Obama accused President Bush of "a false political attack" Thursday after Mr. Bush warned in Israel against appeasing terrorists - early salvos in a general election campaign that's already blazing even as the Democratic front-runner tries to sew up his party's nomination.

The White House denied Mr. Bush had targeted Obama, who said the Republican commander in chief's intent was obvious.

In short order, the controversy spilled across the presidential campaign.

John McCain, the Republican nominee in waiting, said Obama was showing "naiveté and inexperience and lack of judgment" in his willingness to meet with U.S. foes.

Obama, who has said he would meet with leaders of Iran, Syria and Cuba, noted that presidents Kennedy, Nixon and even Reagan also negotiated directly with America's enemies, reports CBS News Capitol Hill Correspondent Chip Reid.

For McCain, the focus on Obama yet again overshadowed his own campaign, and an unusual speech in which he imagined what the world will look like in 2013 at the end of his first term.

"The Iraq war has been won, Iraq is a functioning democracy," McCain said.

The response from Democrats, Reid reports: McCain's crystal ball must be cloudy. Their crystal ball says a democrat will be in the White House and the troops will be out of Iraq.

As the workday began stateside, Mr. Bush gave a speech to Israel's Knesset in which he spoke of the president of Iran, who has called for the destruction of the U.S. ally. Then, the president said: "Some seem to believe that we should negotiate with the terrorists and radicals, as if some ingenious argument will persuade them they have been wrong all along."

"We have heard this foolish delusion before. As Nazi tanks crossed into Poland in 1939, an American senator declared: 'Lord, if I could only have talked to Hitler, all this might have been avoided.' We have an obligation to call this what it is - the false comfort of appeasement, which has been repeatedly discredited by history," Mr. Bush added.

With the president abroad and those seeking to succeed him campaigning at home, the transcontinental tiff signaled the early direction of the general election. Mr. Bush seemed to assume the traditional lame-duck presidential role in trying to help the Republican nominee-in-waiting, and Obama tried to maneuver for advantage - and to show strength - while on the cusp of clinching the Democratic nomination.

McCain played his political role as well in tandem with Obama, notable for two White House hopefuls who are campaigning for a bipartisan governing approach free of the often divisive discourse in Washington.

By tradition, partisan politics comes to a halt when a U.S. president is on foreign soil, and Mr. Bush's remarks led Obama to quickly cry foul. The first-term Illinois senator responded to the comments as if they were criticism of his position that as president he would be willing to personally meet with Iran's leaders and those of other regimes the United States has deemed rogue.

"It is sad that President Bush would use a speech to the Knesset on the 60th anniversary of Israel's independence to launch a false political attack," Obama said in a statement his aides distributed. "George Bush knows that I have never supported engagement with terrorists, and the president's extraordinary politicization of foreign policy and the politics of fear do nothing to secure the American people or our stalwart ally Israel.

In turn, White House press secretary Dana Perino denied that the Knesset remark was aimed at Obama. In fact, the language is fairly typical for Bush speeches, and Gordon Johndroe, a national security spokesman for the president, said Mr. Bush was referring to "a wide range of people who have talked to or suggested we talk to Hamas, Hezbollah or their state sponsors" over a long period of time.

One such person most recently was former President Carter, who held talks with Hamas leaders, leading to criticism from Bush officials as well as Obama and McCain.

Even as the White House said Mr. Bush meant no dig at the Democrat, Perino couldn't resist the opportunity to get in a small one.

"I understand when you're running for office you sometimes think the world revolves around you. That is not always true. And it is not true in this case," she said.

Meanwhile, in Columbus, Ohio, McCain said he took the White House at its word, but then he weighed into the spat himself, saying: "This does bring up an issue that we will be discussing with the American people, and that is, why does Barack Obama, Senator Obama, want to sit down with a state sponsor of terrorism?"

Asked if Obama was an appeaser, McCain said Obama must explain why he wants to talk with leaders like Iran's Mahmoud Ahmadinejad and added that Obama's position was a serious error. "It shows naiveté and inexperience and lack of judgment to say that he wants to sit down across the table from an individual who leads a country that says Israel is a stinking corpse, that is dedicated to the extinction of the state of Israel. My question is, what does he want to talk about?"

Clinton, campaigning in South Dakota in advance of a June 3 Democratic primary, said Mr. Bush's statement had "no place in any presidential address. ...

"I have differences with Senator Obama on certain foreign policy matters, but I think we are united in our opposition to the Bush policies and to the continuation of those policies by Senator McCain." Clinton has criticized Obama in the past for his pledge to meet with prominent adversaries of the United States without precondition.

"The president launched a cheap political attack while on a state visit honoring the 60th anniversary of Israel, one of America's greatest allies," Dean said in a statement. "If John McCain is really serious about being a different kind of Republican, he'll denounce these remarks in the strongest terms possible."

Although his political interest is keen, Mr. Bush has mostly tried to refrain from injecting himself into the presidential race.

He largely remained silent during the Republican primaries but appeared with McCain at the White House after the Arizona senator clinched the nomination and, since then, has talked up McCain frequently. As for the Democratic race, the president typically avoids naming names, but he has publicly disagreed with the positions of the Democratic front-runners, including Obama's expressed willingness to meet leaders of U.S. adversaries.

The debate over whether a president should directly negotiate with such leaders has been one of the most prominent issue differences in the race for the Democratic nomination. Obama has said he would be willing to meet with heads of state in places like Iran, Cuba and North Korea. Clinton has argued that those meetings could be used for propaganda and her first response would be outreach through diplomatic channels.

By criticizing Mr. Bush, Obama sent a signal that he's ready to take on the sitting president and the incumbent party - and tried to counter the notion that Clinton would be the stronger Democratic general election candidate. Democrats also are working to link the unpopular president to McCain at every turn as the public craves change, and even if it wasn't directed at Obama, Mr. Bush's remark gave Democrats an opening to claim more of the same.

"It is time to turn the page on eight years of policies that have strengthened Iran and failed to secure America or our ally Israel," Obama said in his statement. "Instead of tough talk and no action, we need to do what (Presidents) Kennedy, Nixon and Reagan did and use all elements of American power - including tough, principled, and direct diplomacy - to pressure countries like Iran and Syria."

For their part, McCain and Republicans increasingly see Obama as their November rival and have been taking every opportunity to raise questions about his readiness to be a wartime commander in chief. The GOP also hopes to make national security - historically a Republican strength - a focus of the campaign when the political terrain favors Democrats.

Indicating what's to come, McCain said: "Peace through strength is the way we achieve peace in the world. That's the point. I will debate this issue with Senator Obama throughout this campaign."