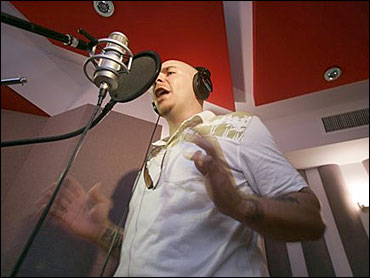 A Spanish-language version of the "Star-Spangled Banner?"

British music producer Adam Kidron said he just wanted to honor the millions of immigrants seeking a better life in the U.S. when he came up with the idea of a Spanish-language version of the national anthem.

Kidron said his idea of "Nuestro Himno" "has never been to discourage immigrants from learning English and embracing American culture," but rather seeks to provide an outlet for patriotism for those who have not yet learned English.

The initial version of "Nuestro Himno," or "Our Anthem" comes out Friday and features artists such as Wyclef Jean, hip-hop star Pitbull and Puerto Rican singers Carlos Ponce and Olga Tanon.

But some Internet bloggers and others are infuriated by the thought of "The Star-Spangled Banner" sung in a language other than English, and the Spanish version of the song has already been the target of a fierce backlash.

"It's kind of an odd way for illegal immigrants to ask the American people to forgive them for their offenses — to appropriate one of our symbols and make it suit them better," Mark Krikorian of the Center for Immigration Studies, a think tank that supports tighter immigration controls, told CBS News correspondent Richard Schlesinger.

However, Canada's national anthem, "O, Canada," is sung in both English and French.

On Friday, Tennessee Senator Lamar Alexander introduced a resolution to, in his words, "Remind the country why we sing our National Anthem in English," reports Schlesinger.

In the first verse, the references to bombs and rockets have been changed to "fierce combat." However, the second stanza is almost all new, with phrases that Francis Scott Key never wrote, such as "we are equal, we are brothers."

There are four verses in the original poem.

"We hope that the President would listen to the passionate and thoughtful rendition of the anthem presented by 'Nuestro Himno' and embrace the opportunity to teach a wider audience about the American Dream," Kidron said.

Pro-immigration protests are planned around the country for Monday, and the record label is urging Hispanic radio stations nationwide to play the cut at 7 p.m. EDT Friday in a sign of solidarity. It was being distributed to stations via e-mail as an MP3 file.

A remix to be released in June will contain several lines in English that condemn U.S. immigration laws. Among them: "These kids have no parents, cause all of these mean laws ... let's not start a war with all these hard workers, they can't help where they were born."

Bryanna Bevens of Hanford, Calif., who writes for the immigration-focused Web magazine Vdare.com, said the remix particularly upset her.

"It's very whiny. If you want to say all those things, by all means, put them on your poster board, but don't put them on the national anthem," she said.

Kidron, a U.S. resident for 16 years, maintains the changes are fitting. After all, he notes, American immigrants borrowed the melody of the "Star-Spangled Banner" from an English drinking song, "To Anacreon From Heaven." (It was sung to that tune as early as 1814, just months after Key wrote the poem, after two Baltimore newspapers noted that the words fit the melody.)

"There's no attempt to usurp anything. The intent is to communicate," Kidron said. "I wanted to show my thanks to these people who buy my records and listen to the music we release and do the jobs I don't want to do."

Kidron said the song also will be featured on the album "Somos Americanos," which will sell for $10, with $1 going to the National Capital Immigration Coalition, a Washington group.

James Gardner, an associate director of the Smithsonian's National Museum of American History, said Americans have long enjoyed different interpretations of "The Star-Spangled Banner," including country or gospel arrangements.

"There are a number of renditions that people aren't happy with, but that's part of it — that it means enough for people to try to sing," he said.

"The Star-Spangled Banner" only became the U.S. national anthem in 1931. There is no official instrumental arrangement of the anthem. The U.S. Marine and Army bands play different versions, often in different keys.

Of the 389 recordings listed at AllMusic.com, none is in Spanish.

Key penned several different versions, and the law making it the U.S. national anthem does not specify the exact words.

Pitbull, whose real name is Armando Perez, said this country was built by immigrants, and "the meaning of the American dream is in that record: struggle, freedom, opportunity, everything they are trying to shut down on us."

"I love my country, and I love my [Mexican musical] heritage, and I try to keep it alive," bandleader Benigno "Benny" Layton of Elsa, Texas, told The Washington Post. "But some things are sacred that you don't do. And translating the national anthem is one of them."