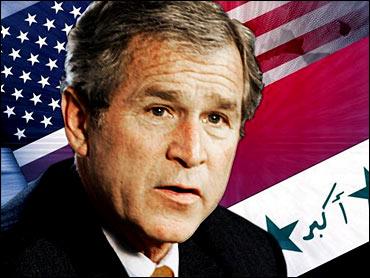 It pays the initial tab for the war in Iraq, but the almost $80 billion spending bill President Bush signed Wednesday gives him little of the independence he sought in spending it.

Mr. Bush signed the wartime spending bill in the Oval Office shortly before making a trip to St. Louis, where he spoke on national security and the U.S. economy and called on the United Nations to lift crippling economic sanctions against Baghdad.

"We were successful in making the world a more peaceful place," he told some 1,000 military personnel and employees of a Boeing Co. factory that makes the F/A-18 Super Hornet — fighter jets that flew missions during the conflict from two aircraft carriers.

Before his speech, Mr. Bush donned clear safety glasses and saw fighter fuselages on the production floor at the Boeing factory.

He complemented workers for their part in the war half a world away and hailed the technological advances that have produced a superior American fighting force.

"Our work is not done, the difficulties have not passed but the regime of Saddam Hussein has passed into history," said Mr. Bush, his voice booming through the cavernous room, the roar of planes heard overhead.

Mr. Bush had wanted unfettered control of $60 billion of the nearly $63 billion earmarked for the Pentagon, but a House-Senate compromise sliced the money the president could control to $15 billion. Lawmakers also voted to require Mr. Bush to tell them how he plans to spend the money five days before he disburses it.

The president won the power to give the Pentagon a role in spending some of nearly $2.5 billion for rebuilding Iraq and providing humanitarian aid there. Some lawmakers wanted to steer the money to the State Department, but final language included the Defense Department among agencies allowed to tap into the fund.

"The president does remain concerned about the flexibility provided to him," spokesman Scott McClellan said.

The spending bill also includes money to fight terrorism and bolster homeland security, and it provides about $3 billion for the slumping airline industry.

Democrats criticized Mr. Bush for appearing with Boeing employees just days after he opposed extending unemployment insurance for workers in aviation industries. The unemployment rate for the airline industry is three times the national average. Boeing slashed 30,000 jobs by the end of 2002 and said it would eliminate another 5,000 positions, mostly in the commercial airplane group, in 2003.

"It is amazing that after fighting against aid for Boeing workers, the president is showing up at their doorstep to praise them," said Sen. Patty Murray, D-Wash., who sponsored a provision in the war spending bill to extend unemployment benefits another 26 weeks for aviation workers. "While they certainly deserve recognition for their work, they also deserve our support."

On April 8, White House budget director Mitch Daniels wrote to the chairmen of the House and Senate appropriations committees, saying the administration strongly opposed the provision. "To provide benefits for a specific industry would be unusual, unfair and potentially harmful to our national unemployment system," Daniels wrote.

Tom Buffenbarger, president of the International Association of Machinists and Aerospace Workers, said 238 machinists at the plant will be laid off within 72 hours of Mr. Bush's visit.

"It is a travesty to ask these soon-to-be laid off men and women to be props in a photo-op," he said.

It's the president's 10th visit to Missouri, a state with 11 electoral votes he is eying for his re-election bid. He barely won the state in 2000.

From St. Louis, Mr. Bush travels to his Texas ranch, which he has not visited since February, for a five-day stay.