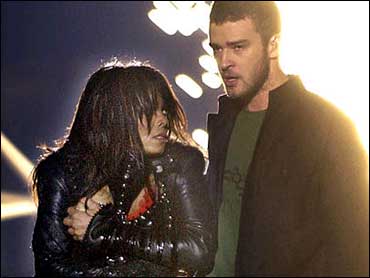 At a signing ceremony for the new law increasing by tenfold the maximum fine for indecency, Mr. Bush said that it will force industry figures to "take seriously their duty to keep the public airwaves free of obscene, profane and indecent material."

For raunchy talk or a racy show of skin, the Federal Communications Commission can now fine a broadcaster up to $325,000 per incident.

Approval of the bill culminates a two-year effort to get tough on sexually explicit material and offensive language on radio and television following Janet Jackson's 2004 Super Bowl "wardrobe malfunction."

The FCC recently denied a petition of reconsideration from CBS Corp.-owned stations facing $550,000 in fines over the Jackson incident, in which she briefly revealed a breast during a halftime concert.

The FCC has received increasing complaints about lewd material over the airwaves, and has responded with fines jumping from $440,000 in 2003 to almost $8 million in 2004.

"The problem we have is that the maximum penalty that the FCC can impose under current law is just $32,500 per violation," Mr. Bush said. "And for some broadcasters, this amount is meaningless. It's relatively painless for them when they violate decency standards."

The bill does not apply to cable or satellite broadcasts, and does not try to define what is indecent. The FCC says indecent material is that which contains sexual or excretory material that does not rise to the level of obscenity.

The legislation, while facing little resistance in Congress, had detractors warning of problems in defining what is indecent and of the erosion of First Amendment rights.

"The government's own data show that the vast majority of complaints come from a handful of people encouraged by activists to complain about these shows, and not the viewers themselves," said Jim Dyke, executive director of TV Watch, an interest group that includes NBC and CBS and opposes government regulation of television programming. "The disparity between the millions who tune in and the few complainants is further evidence that Americans do not believe the government should control what they watch on TV."

Under FCC rules and federal law, radio and over-the-air television stations may not air obscene material at any time, and may not air indecent material between 6 a.m. and 10 p.m. when children are more likely to be in the audience.

"Unfortunately, in recent years, broadcast programming has too often pushed the bounds of decency," Mr. Bush said. "The language is becoming coarser during the times when it's more likely children will be watching television. It's a bad trend, a bad sign."