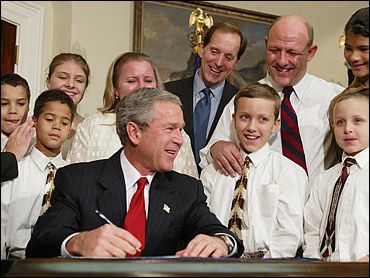 Urging more Americans to consider "an act of great generosity," President Bush signed legislation Tuesday aimed at promoting adoption of older children to move them out of foster care into permanent homes.

"For the sake of our children this nation has a responsibility to encourage adoption of children at all ages, from infants to adolescents," Mr. Bush said at a White House ceremony where he mingled with adoptive families.

The Adoption Promotion Act extends and builds on a Clinton-era program that provides incentives to state adoption efforts. In signing the program's extension, he said parents who choose adoption often "count it among life's greatest and happiest turning-points."

Mr. Bush said that thanks to financial incentives and a federal Web site, www.adoptUSkids.org, the number of adoptions has already doubled.

However, the president said some 126,000 American foster children are still waiting for a permanent home.

Among other things, the bill expands federal monitoring of adoptions and provides extra incentives for hard-to-place older children.

The legislation was praised by adoption proponents as a positive step.

The new law will give states money so they can reduce fees and help low-income parents afford the adoption process.

"It's shameful how many children we have right now in foster homes so we do support this legislation."