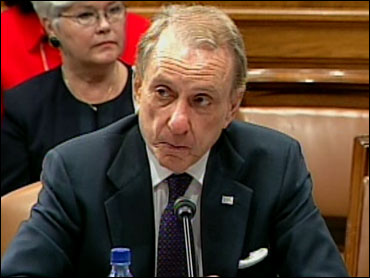 As a Senate hearing into President Bush's prolific use of "bill signing statements" got under way Tuesday, the White House defended the practice, which tends to limit the impact of bills he signs into law, saying it helps him uphold the Constitution and defend the nation's security.

"There's this notion that the president is committing acts of civil disobedience, and he's not," said Mr. Bush's press secretary Tony Snow, speaking at the White House. "It's important for the president at least to express reservations about the constitutionality of certain provisions."

Signing statements are not new, reports CBS News correspondent Bob Fuss, nor is the power of the president to refuse to enforce a law he considers unconstitutional — at least until a court rules on it.

But a number of Democrats, and notably the Republican chairman of the Senate Judiciary Committee, Arlen Specter, say President Bush, who has never vetoed a bill, has abused signing statements as part of a pattern of taking greater powers.

Such statements have accompanied some 750 statutes passed by Congress, including a ban on the torture of detainees and the renewal of the Patriot Act.

"There is a sense that the president has taken signing statements far beyond the customary purview," Specter, R-Pa., said.

"It's a challenge to the plain language of the Constitution," he added. "I'm interested to hear from the administration just what research they've done to lead them to the conclusion that they can cherry-pick."

Democrats pounced, saying the signing statements are the latest example of the administration's expansion of executive power.

"I believe that this new use of signing statements is a means to undermine and weaken the law," said Sen. Dianne Feinstein, D-Calif. "If the president is going to have the power to nullify all or part of a statute, it should only be through veto authority that the president has authorized and can reject — rather than through a unilateral action taken outside the structures of our democracy."

"Even if there is modest increase, let me just suggest that it be viewed in light of current events and Congress' response to those events," said Justice Department lawyer Michelle Boardman. "The significance of legislation affecting national security has increased markedly since Sept. 11."

Specter's hearing is about more than the statements. He's been compiling a list of White House practices he bluntly says could amount to abuse of executive power — from warrantless domestic wiretapping program to sending officials to hearings who refuse to answer lawmakers' questions.

But the session also concerns countering any influence Mr. Bush's signing statements may have on court decisions regarding the new laws. Courts can be expected to look to the legislature for intent, not the executive, said Sen. John Cornyn, R-Texas., a former state judge.

"The president is entitled to express his opinion. It's the courts that determine what the law is," he said. "I don't know why the issue of presidents issuing signing statements is controversial at all."

But Specter and his allies maintain that Mr. Bush is doing an end run around the veto process. In his presidency's sixth year, Mr. Bush has yet to issue a single veto that could be overridden with a two-thirds majority in each house.

"The president is not required to (veto)," Boardman said.

"Of course he's not — if he signs the bill," Specter snapped back.

Instead, Mr. Bush has issued hundreds of signing statements invoking his right to interpret or ignore laws on everything from whistleblower protections to how Congress oversees the Patriot Act.

"It means that the administration does not feel bound to enforce many new laws which Congress has passed," said David Golove, a New York University law professor who specializes in executive power issues. "This raises profound rule of law concerns. Do we have a functioning code of federal laws?"

Signing statements don't carry the force of law, and other presidents have issued them for administrative reasons, such as instructing an agency how to put a certain law into effect. They usually are inserted quietly into the federal record.

Mr. Bush's signing statement in March on Congress's renewal of the Patriot Act riled Specter and others who labored for months to craft a compromise between Senate and House versions, and what the White House wanted. Reluctantly, the administration relented on its objections to new congressional oversight of the way the FBI searches for terrorists.

Mr. Bush signed the bill with much flag-waving fanfare. Then he issued a signing statement asserting his right to bypass the oversight provisions in certain circumstances.

Specter isn't sure how much Congress can do to check the practice. "We may figure out a way to tie it to the confirmation process or budgetary matters," he said.