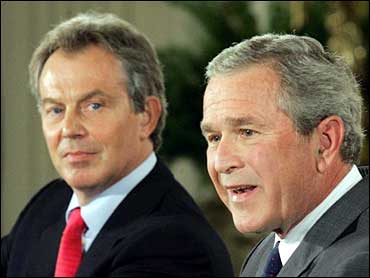 Ahead of this week's G-8 summit, President Bush says he wants to shift debate on global warming away from limits on greenhouse gas emissions to new technology that would reduce environmental harm without restricting energy use.

In an interview with British journalist Trevor McDonald to be broadcast on ITV television Monday, Mr. Bush repeated his opposition to the Kyoto Protocol on climate change and said the U.S. would not sign it or any similar deals limiting gas emissions.

"I think you can grow your economy and at the same time do a better job of harnessing greenhouse gases," Mr. Bush said. "That's exactly what I intend to talk to our partners about."

British Prime Minister Tony Blair, who hosts the three-day summit of major industrial powers that begins Wednesday in Scotland, plans to make action on global warming a top focus along with tackling poverty in Africa.

Mr. Bush spoke of his administration's investment of $20 billion in developing hydrogen-powered vehicles, zero-emission power stations and other technology.

The Bush administration opposes the 1997 Kyoto treaty because officials believe it would raise energy prices and cost 5 million U.S. jobs.

"My hope is — and I think the hope of Tony Blair is — to move beyond the Kyoto debate and to collaborate on new technologies that will enable the United States and other countries to diversify away from fossil fuels so that the air will be cleaner and that we have the economic and national security that comes from less dependence on foreign sources of oil," Mr. Bush said.

Blair, who has described global warming as "probably the most serious threat we face" wants an agreement among G-8 leaders on the scientific threat posed by global warming and the urgent need for action.

He also wants greater research in so-called green technology, and to draw emerging economies such as China, India, Brazil and Mexico into the debate.

Mr. Bush described climate change as "a significant, long-term issue that we've got to deal with" and acknowledged that human activity is "to some extent" to blame.

Mr. Bush also made it clear that he was not ready to slash the farm subsidies that critics say distort global trade and make it difficult for African economies to compete unless the European Union was also prepared to scrap its Common Agricultural Policy.

"We've got agricultural subsidies, not nearly to the extent that our friends in the EU have," he said. "... The position of the U.S. government is, we're willing to do so and we will do so with our fine friends in the European Union."

In the interview, Mr. Bush was also asked if he would make a special effort to support Blair at the summit in return for the British leader's backing for the war in Iraq.

"I really don't view our relationship as one of quid pro quo," Mr. Bush replied. "Tony Blair made decisions on what he thought was best for keeping the peace and winning the war on terror, as I did. So I go to the G-8 not really trying to make him look bad or good, but I go to the G-8 with an agenda that I think is best for our country."