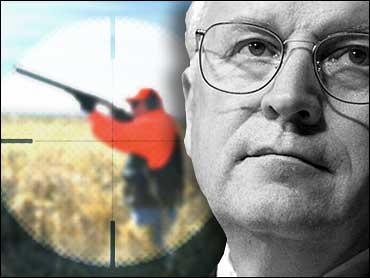 President Bush is "satisfied" with what Vice President Dick Cheney said in a broadcast interview about his accidental shooting of a hunting partner, White House spokesman Scott McClellan said Thursday.

But McClellan declined to say whether the president felt it should have been revealed earlier.

"I think that the vice president clearly explained the rationale behind that," McClellan said, avoiding a direct response to questions about whether the president felt the incident was publicly disclosed in a timely manner.

The accident happened on Saturday but was not publicly revealed until the next day.

The shooting victim, 78-year-old attorney Harry Whittington, remained in stable condition in a Texas hospital Thursday, two days after doctors said that a shotgun pellet entered his heart and he had what they called "a mild heart attack."

Hospital officials said Whittington was "doing wonderfully and superb" and they expected no further complications.

Cheney spoke publicly about the accident for the first time Wednesday in an interview with Fox News Channel. He said he did not see Whittington until just after he fired on a covey of quail and peppered him with bird shot in the face, neck and chest.

Cheney described it as "one of the worst days of my life" and rejected the notion that Whittington bears any responsibility. "I'm the guy who pulled the trigger and shot my friend," Cheney said.

"The president's satisfied with what the vice president said yesterday," McClellan said Thursday. "I think the American people are looking at this and saying, enough already," he added.

Asked whether Mr. Bush encouraged Cheney to speak out, McClellan said, "Obviously there are internal discussions that we have, and I'll leave those internal."

But sources tell CBS News it was Mr. Bush's top political aide, Karl Rove, who pushed Cheney to speak publicly about the shooting.

Cheney is in a "state of meltdown" over shooting his friend and the political fallout it has caused, a source close to Cheney said.

CBS News correspondent Gloria Borger reports another source within the White House said "you can imagine how upset the vice president is," adding that the Whittington family is worried about Cheney.

Cheney had been under intense political pressure to speak out about the shooting incident, which has become a public relations embarrassment and potential political liability for the White House. Until Wednesday, Cheney had refused to comment on why he withheld information about the shooting, which prolonged the controversy and made him the butt of jokes.

But Borger reports that the incident has not hurt the president's relationship with Cheney, and a source told her the two are still close.

He said he had had a beer at lunch that day but nobody was drinking when they went back out to hunt a couple hours later. Law enforcement officials have ruled out alcohol as a factor.

Cheney said he still believes it was the right decision to allow ranch owner Katharine Armstrong to disclose the accident to the Corpus Christi Caller-Times the day after the accident.

Cheney said: "We really didn't know until Sunday morning that Harry was probably going to be OK, that it looked like there hadn't been any serious damage to any vital organ. And that's when we began the process of notifying the press."

Armstrong has suggested that Whittington was at fault in the shooting because, she said, he failed to announce himself as he returned to the hunting line after breaking off to retrieve a downed bird. But Cheney, who has been hunting for at least 12 years, said in no uncertain terms that Whittington was not at fault.

"You can talk about all of the other conditions that exist at the time, but that's the bottom line and it was not Harry's fault," he said.

Texas officials said the shooting was an accident, and no charges have been brought.