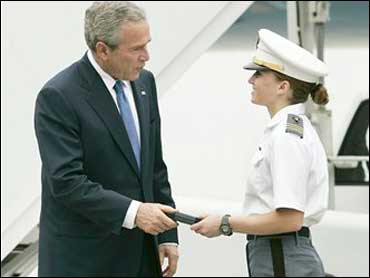 The United States will take the fight against terrorism to every shore and outpost in pursuit of enemies like none before, not relenting until their defeat and showing the same resolve that won the Cold War, President Bush told West Point graduates Saturday.

"America will fight the terrorists on every battlefront. And we will not rest until this threat to our country has been removed," the commander in chief said in his commencement address at the U.S. Military Academy.

"Against such an enemy there is only one effective response: We will never back down, we will never give in, and we will never accept anything less than complete victory," Bush said.

Mr. Bush recounted the challenges and setbacks in the early years after World War II, when the Cold War took root. He commended President Truman for laying the groundwork of success against communism and said that what was he was doing today against a more elusive enemy, global terrorists.

"By the actions he took, the institutions he built, the alliances he forged and the doctrines he set down, President Truman laid the foundation for America's victory in the Cold War," Mr. Bush said.

"Today at the start of a new century, we are again engaged in a war unlike any our nation has fought before. And like Americans in Truman's day, we are laying the foundations of victory," the president said.

To the 861 men and woman in West Point's 208th graduating class, Mr. Bush warned them that "the enemies we face today are in many ways different than the enemies we faced in the Cold War. The terrorists have no borders to protect of capital to defend. They cannot be deterred but they will be defeated."

"The reality of war has surrounded you since your first moments at this academy," Mr. Bush told the audience. He noted that more than 50 fellow cadets already have seen combat, and 34 former cadets have died in the fight against terrorism.

"We will honor the memory of those brave souls. We will finish the task for which they gave their lives. We will complete the mission," Bush said.

`With the formation of this unity government, the world has seen the beginning of something new, a constitutional democracy in the heart of the Middle East," the president said.

"Difficult challenges remain in both Afghanistan and Iraq, but America is safer and the world is more secure because these two countries are now democracies and they are allies in the cause of freedom and peace."

Violence has intensified recently in Afghanistan and Iraq is hanging heavily over Mr. Bush's presidency.

At least 2,450 members of the U.S. military have died since Bush ordered an invasion of Iraq more than three years ago. The war is a major factor in Mr. Bush's slump in the polls to the lowest point of his presidency. There are 132,000 U.S. troops in Iraq, and election-year pressure is building to begin troop withdrawals.

"We're still in the early stages of this struggle for freedom and, like the first years of the Cold War, we've seen setbacks and challenges and days that have tested America's resolve. Yet we've also seen days of victory and hope."