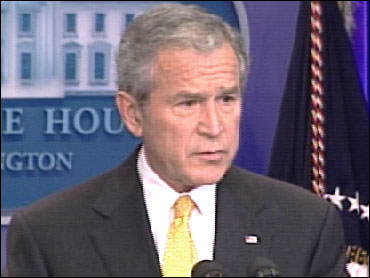 President Bush took the very rare step Wednesday of revoking a pardon he had granted only a day before, after learning in news reports of political contributions to Republicans by the man's father and other information.

Mr. Bush pardoned 19 people on Tuesday, including Isaac Robert Toussie of Brooklyn, N.Y., who had been convicted of making false statements to the U.S. Department of Housing and Urban Development and of mail fraud. On Wednesday, the White House issued an extraordinary statement saying the president was reversing his decision in Toussie's case.

White House press secretary Dana Perino said the new decision was "based on information that has subsequently come to light," including on the extent and nature of Toussie's prior criminal offenses. She also said that neither the White House counsel's office nor the president had been aware of a political contribution by Toussie's father that "might create an appearance of impropriety."

"Given that, this was the prudent thing to do," she said.

The counsel's office generally doesn't include vetting of political contributions in its reviews on such matters, as that would be "highly inappropriate on many levels," she said. The White House decision on Toussie had come without a recommendation from the pardon attorney, Ronald L. Rodgers, as Toussie's request for a pardon came less than five years after completion of his sentence, so that eliminated another step in the review process.

The Justice Department advises the president on who qualifies for pardons. Only people who have waited five years after their conviction or release from prison can apply for a pardon under the department's guidelines. Criminals are required to begin serving time, or otherwise exhaust any appeals, before they can be considered for sentence commutation.

But the president can forgive people outside that process if he chooses. Under the Constitution, the president's power to issue pardons is absolute and cannot be overruled — meaning he can forgive anyone he wants, at any time.

Perino said she is not aware of any other instance of a pardon reversal, in the Bush administration or others.

"The counsel to the president reviewed the application and believed, based on the information known to him at the time, that it was a meritorious application," she said. Mr. Bush now believes the case should rest with the pardon attorney.

The Daily News story on Wednesday, and another in Newsday and on blogs, shed light on Toussie's record. He pleaded guilty for lying to HUD and mail fraud, admitting that he falsified finances of prospective homebuyers seeking HUD mortgages. He was sentenced to five months in prison and five months' house arrest, a $10,000 fine and no restitution, the Daily News reported.

In another case, Toussie pleaded guilty to having a friend send his local county a letter that falsely inflated property values.

The Daily News also located a lawyer representing hundreds of ex-customers who have sued Toussie in federal court, accusing him of luring poor, minority homebuyers into buying overpriced homes with mortgages that had hidden costs.

Federal Election Commission records show a number of donations to Republicans this year by Robert Toussie and by a Laura Toussie who lists the same address. Between them, they gave $4,600 to Minnesota GOP Sen. Norm Coleman and another $4,600 to Oregon Republican Sen. Gordon Smith, all on Oct. 15. Coleman is locked in a still-undecided race against Democrat Al Franken, and Smith lost in November to Democrat Jeff Merkley.

His contribution to the Republican National Committee came as part of a fundraiser in March for GOP presidential candidate John McCain. Out of a total donation of $30,800 by Toussie, $2,300 went to McCain's campaign and $28,500 went to the RNC.

Doug Berman, a law professor at Ohio State University and a close follower of presidential clemency decisions, said the White House decision strikes him as unprecedented, but he said it's not inconceivable that it had happened in the past.

"It's, at best, embarrassing. At worst, it's an extraordinary example of this White House's ability to bollox up one bit of presidential authority that he clearly has," Berman said.

Bradford Berenson, an associate White House counsel during Bush's first term and Isaac Toussie's lawyer, said in a statement that his client remained confident the pardon attorney would grant his request.

"Isaac Toussie is deeply grateful that both the counsel to the president and the president himself found Mr. Toussie's pardon application to have sufficient merit to be granted," Berenson said. "Mr. Toussie looks forward to the pardon attorney's expeditious review of the application."

Berenson declined to elaborate further on the case and its developments.

With the Toussie reversal, Bush has granted a total of 189 pardons and nine commutations. That's fewer than half as many as Presidents Clinton or Reagan issued during their two-term tenures.