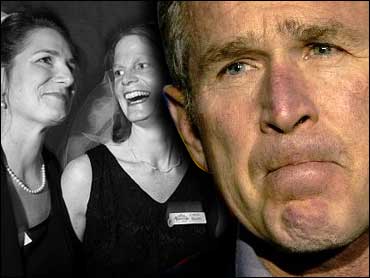 President George W. Bush on Saturday sparked what is sure to be a fierce debate over same sex marriage by backing a resolution to amend the U.S. Constitution to define marriage as a union between a man and a woman – even though the idea has little chance of being passed in the Senate.

"Ages of experience have taught us that the commitment of a husband and a wife to love and to serve one another promotes the welfare of children and the stability of society," Mr. Bush said in his Saturday radio address. "Marriage cannot be cut off from its cultural, religious and natural roots without weakening this good influence on society."

Democrats say Senate floor time is being wasted on the issue, and accuse Republicans of making a pre-midterm election appeal to social conservatives whose votes were key to Mr. Bush's re-election.

Some conservatives agree, CBS News correspondent Joie Chen reports. "In politics, you dance with the one that brung you, and the values voters put this president and this GOP congress in office," Charmaine Yoest of Family Research Council tells her, "They should remember that."

This November, initiatives banning same-sex marriages are expected to be on the ballot in Idaho, South Carolina, South Dakota, Tennessee, Virginia and Wisconsin.

"Sadly, President Bush is playing election-year politics with this divisive issue," the Rev. Barry W. Lynn, executive director of Americans United for Separation of Church and State, said Friday. "He is shamelessly using this ploy to energize his right-wing base. We should never rewrite the Constitution to enshrine intolerance."

The White House said Mr. Bush did not devote his radio address to the issue or decide to host a presidential event Monday to again endorse the amendment because it is politically expedient, but because there's a vote on it scheduled next week in the Senate.

"On Monday, I will meet with a coalition of community leaders, constitutional scholars, family and civic organizations and religious leaders," Mr. Bush said in urging Congress to pass the amendment and send it to the states for ratification. "They're Republicans, Democrats and independents who've come together to support this amendment."

The amendment would prohibit states from recognizing same-sex marriages. To become law, the proposal would need two-thirds support in the Senate and House, and then would have to be ratified by at least 38 state legislatures.

Mr. Bush said the amendment would fully protect marriage from being redefined, while leaving state legislatures free to make their own choices in defining legal arrangements other than marriage.

It stands little chance of passing the 100-member Senate, where proponents are struggling to get even 50 votes. Several Republicans oppose the measure, and so far only one Democrat — Sen. Ben Nelson of Nebraska — has said he will vote for it.

"As this debate goes forward, we must remember that every American deserves to be treated with tolerance, respect and dignity," he said. "All of us have a duty to conduct this discussion with civility and decency toward one another, and all people deserve to have their voices heard."

David Buckel, Marriage Project director of Lambda Legal, a national organization working to protect the rights of lesbians, gay men and others, said the amendment would be damaging to the lives of same-sex couples and families, which raise millions of children.

"It would brand lesbians and gay men as legally inferior individuals," he said. "It would write into the supreme law of the land that this group of people are inferior and when it's the law, it's a message to everyone else in society that they have license to discriminate."

In his radio address, Mr. Bush struck back at judges who have overturned state laws similar in intent to the proposed legislation.

"Unfortunately, activist judges and some local officials have made an aggressive attempt to redefine marriage in recent years," the president said.

Mr. Bush said there is broad consensus in America to protect the institution of marriage.