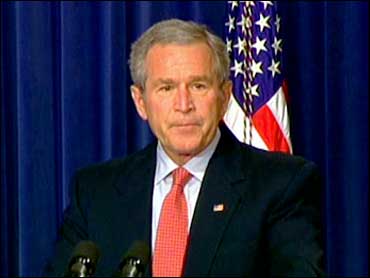 President Bush said Monday that he is "proud to stand with" those who support a constitutional amendment to ban same-sex marriage, as the Senate opened a volatile, election-year debate on the issue.

"Our policies should aim to strengthen families, not undermine them. And changing the definition of marriage would undermine the family structure," said Mr. Bush, who raised the issue's profile with an event at the Eisenhower Executive Office Building.

Mr. Bush criticized judges who have overturned state laws similar in intent to the proposed legislation. "Marriage is the most fundamental institution of civilization, and it should not be redefined by activist judges," he said.

Traditional marriage, he said, is the cornerstone of a healthy society and the issue should be put "back where it belongs: in the hands of the American people."

There was little chance of that in the near future. Neither the House nor the Senate is likely to pass the amendment by the two-thirds majority required to send it to the states — three quarters of which would then have to approve it.

Click here to sound off on the same-sex marriage debate.

The White House says the president, who's been largely silent on the issue since his reelection, is talking about it now because of the impending Senate vote.

"I think it is an election-year tactic, but I think more than anything it is a response to rapidly slipping numbers from the right-wing base," Joe Salomonese of the Human Rights Campaign says.

Midterm elections are just a few months away and many conservative groups have been unhappy with Republican work so far.

"Better late than never," says the Family Research Charmaine Yoest. "But I think the GOP really needs to learn its lesson; that its core supporters really do care about social issues."

"The world's going to Hades in a hand basket. We're going to debate the next three weeks, I'm told, gay marriage, a flag amendment and God only knows what else. I can't believe the American people can't see through this," Sen. Joe Biden, D-Del., said on NBC's "Meet the Press."

Many Republicans support the measure because they say traditional marriage strengthens society; others don't, but concede the reality of election-year politics.

"Marriage between one man and one woman does a better job protecting children better than any other institution humankind has devised," said Senate Majority Leader Bill Frist, R-Tenn. "As such, marriage as an institution should be protected, not redefined."

White House press secretary Tony Snow acknowledged said there was a political dimension to Mr. Bush's remarks Monday, but said the president was not calling senators to persuade them to pass the amendment.

"I'm not sure this is a big driver among voters," Snow said.

All but one of the Senate Democrats — the exception is Ben Nelson of Nebraska — oppose the measure and, with moderate Republicans, are expected to block an up-or-down vote, killing the measure for the year.

Senate Democratic Leader Harry Reid of Nevada, who says he believes marriage is the union of a man and a woman, said he nonetheless will vote against the amendment on a test vote Wednesday.

"The reason for this debate is to divide our society, to pit one against another," Reid said in remarks prepared for delivery on the Senate floor. "This is another one of the presidents efforts to frighten, to distort, to distract, and to confuse America. It is this administration's way of avoiding the tough, real problems that American citizens are confronted with each and every day."

Mr. Bush's views on the federal marriage amendment differ from those held by Vice President Dick Cheney, whose daughter, Mary, is a lesbian.

Cheney said he thinks Americans should do everything they can to tolerate and accommodate whatever kind of relationships people want to enter in to. He said he does not think there should necessarily be a federal policy in this area.