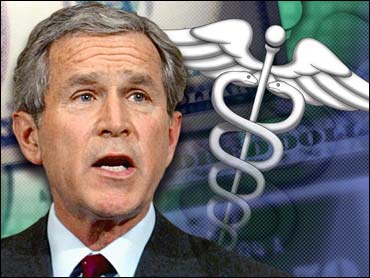 President Bush launched his second-term campaign for limits on damage awards Wednesday by declaring that doctors should be fighting illnesses, not lawsuits.

The president made his case at a stop in Madison County, Illinois, recently rated by a lobbying group as the best place in America to file suit.

"What I'm here to do is say as clearly as I can — the United States Congress needs to pass real medical liability reform this year," Mr. Bush said in Collinsville, Ill., standing on stage in front of dozens of doctors in white lab coats.

Mr. Bush said that large malpractice awards have increased the cost of business so much that doctors have to close their businesses or scale back services. He said it also drives up the cost of personal health insurance.

"Many of the costs we are talking about don't start in an examining room or an operating room, they start in a courtroom," said Mr. Bush.

"There is a constant risk of being hit by a massive jury award, so doctors end up paying tens of thousands or even hundreds of thousands to settle a medical claim out of court even when they know they have done nothing wrong," the president said.

Exhibit A in Mr. Bush's case is Madison County, Ill., across the Mississippi River from St. Louis, named the country's top "judicial hellhole" by the American Tort Reform Association last year because of its reputation for big awards.

Lawyers in the area say the legal situation has been exaggerated and Mr. Bush is demonizing the county even though large malpractice awards have been scarce. Leading Democrats in Congress say the number of doctors practicing in Illinois has risen in recent years, despite higher malpractice insurance rates that they say are driven by the state's weak insurance regulation.

Mr. Bush personalized his point by meeting with a neurosurgeon, an obstetrician gynecologist, a cardiologist, a hospital administrator and a pregnant woman who had to change doctors repeatedly because so many were going out of business.

The president's visit to Madison County was one of several events this week to win congressional and public support for tort reform. He faces strong opposition from Democrats in Congress, who say patients deserve the right to seek awards, without arbitrary ceilings, for medical mistakes.

Sen. Edward M. Kennedy, D-Mass., called the president's plan "nothing but a shameful shield for drug companies and HMOs who hurt people through negligence." He urged the president to offer a plan that puts patients first.

On Thursday, Mr. Bush is inviting members of both parties in Congress to discuss the issue in the White House. On Friday, he plans a trip to Clinton, Mich., focused on asbestos lawsuits, which represent the longest-running mass tort litigation in U.S. history.

Caps on damage awards of varying types have been implemented in 27 states, but a proposed federal cap, though successful in the House, was defeated because of Democratic opposition in the Senate.

Republicans strengthened their majorities in both chambers and intend to work again with Mr. Bush to impose a nationwide cap on pain and suffering awards. Mr. Bush wants a $250,000 cap on non-economic damages that compensate for pain and suffering, along with other limits.

"Lawyers are filing baseless suits against hospitals and doctors, that's just a plain fact," he said. "They are doing it for a simple reason — they know the medical liability system is tilted in their favor."

But the lawyers who win those awards for malpractice victims and other opponents of Mr. Bush's initiative say the real problem is insurers who look to raise premiums and, consequently, their bottom line. They also use personal stories to tell their side, such as a woman who said doctors switched her test results and mistakenly told her she had breast cancer before amputating both her breasts. She is featured in a $250,000 television ad buy in the St. Louis and Washington markets to coincide with the president's visit.