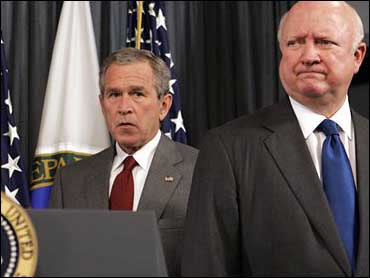 President Bush said Monday that the government is prepared to again tap into the Strategic Petroleum Reserve to alleviate any new pain at the pump caused by Hurricane Rita's assault on the center of the nation's energy industry.

He also implied he will likely name a federal czar-like official to oversee the reconstruction of the Gulf Coast from the devastation caused by Hurricane Katrina. But he said that local officials must first produce a vision for how they want their rebuilt communities to look.

"I'm considering how best to balance the need for local vision and federal involvement," he said. "The vision and the element of reconstruction is just beginning and there may be a need for an interface with a particular person to help to make sure that the vision becomes reality."

Sen. David Vitter, R-La., said Monday he had urged the president to place "a strong federal leader on the Katrina reconstruction effort" beyond the short-term relief effort. Such a "reconstruction czar" would also need to make sure there were no improprieties in awarding the lucrative reconstruction contracts, Vitter said.

"If the American people lose confidence in this effort, Louisiana and the victims of the storm are going to suffer, so we have to have those protections in place," Vitter said in an interview on NBC's "Today" show.

With early indicators offering reason for optimism and a speedy recovery, Mr. Bush nonetheless warned Americans to expect some effect on energy supplies.

"A lot of our production comes from the Gulf and when you have a Hurricane Katrina followed by a Hurricane Rita, it's natural, unfortunately, that it's going to affect supplies," he said after a briefing at the Energy Department.

Mr. Bush also expressed concern that the storm could cause disruptions in getting gasoline to market. As a result, he urged people in the area to curtail any nonessential travel and asked federal employees to carpool as much as possible.

"The storms have shown how fragile the balance is between supply and demand in America," he said.

He said he was returning to the hurricane-affected region on Tuesday, traveling to Beaumont and Port Arthur, Texas — two of the harder-hit areas. In a three-day trip he concluded on Sunday, the president did not have direct contact with areas or people affected by the storm, spending the entire weekend getting briefings from military and other federal officials in Colorado, Texas and Louisiana.

The nation's four Strategic Petroleum Reserve sites on the Gulf Coast, two underground caverns in Texas and two in Louisiana, hold nearly 700 million barrels of oil. In the aftermath of Hurricane Katrina, the federal government provided several refineries with oil from the reserve to make up for supply losses.

But 16 Texas oil refineries remained shut down after the storm, and crews found significant damage to at least one in the Port Arthur area, said Energy Department spokesman Craig Stevens.

Mr. Bush declined to shed more light on a politically sensitive idea he has been gentle pushing for more than a week — making the military the lead agency in charge in the event of a catastrophic natural disaster or terrorist attack. Congress would have to change law for that to happen.

Under existing law, a state's governor is chiefly responsible for disaster response, including control over the state's National Guard. In a crisis, the Guard would be working with active duty troops. The Homeland Security Department and the Federal Emergency Management Agency response to requests to states, and if federal troops are brought in to help, they do so in support of FEMA.

"I want there to be robust discussion," Mr. Bush said.

The issue balances the need for an adequate response to disasters against trampling on states' rights.

A key economic Bush aide — Ben Bernanke, chairman of the White House Council of Economic Advisers — said Sunday that hundreds of thousands of jobs were at risk if the storm stunted oil production – even though early assessments show little damage to most refineries.

Government officials, meanwhile, were satisfied with the response to Rita, including better stockpiling of supplies, early evacuations and more military muscle than deployed four weeks ago against Hurricane Katrina.