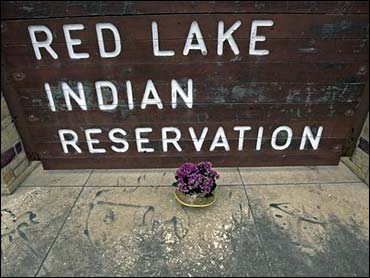 President Bush on Friday expressed condolences to the leader of the Minnesota Indian reservation where 10 people died Monday in the second-worst school shooting in U.S. history.

Jeff Weise, 16, shot to death five students, a security guard and a teacher at the school on Red Lake Indian reservation, then killed himself. Earlier, he shot to death his grandfather and the man's girlfriend.

Gifts of money have been pouring into the tribe as it prepares for the victims' funerals. Mr. Bush told Jourdain that he used part of his weekly radio address to encourage Americans to send more help, Perino said. The president's address was taped Friday morning and will be broadcast Saturday.

"Chairman Jourdain said he was very appreciative of the call and for the federal assistance so far," Perino said. "The president ended the call by saying he is praying for the victims and the families."

Some American Indians have complained that Mr. Bush did not respond publicly to the shooting for four days. Just hours after the shootings at Colorado's Columbine High School that left 15 dead, then-President Clinton publicly expressed his condolences.

"When people's children are murdered and others are in the hospital hanging on to life, he should be the first one to offer his condolences," Clyde Bellecourt, national director of the American Indian Movement, told the Washington Post.

"If this was a white community, I don't think he'd have any problem doing that," Bellecourt said.

Mr. Bush's delayed reaction was in contrast to his swift intervention in the Terri Schiavo case. The president interrupted his vacation and hurried to Washington on Sunday to sign legislation allowing federal courts to consider the case of the brain-damaged Florida woman.

"The fact that Bush preempted his vacation to say something about Ms. Schiavo and here you have 10 native people gunned down and he can't take time to speak is very telling," said David Wilkins, interim chairman of the Department of American Indian Studies at the University of Minnesota.

Mr. Bush has been mostly out of public view at his ranch in Crawford, Texas, since Tuesday night. But did not mention the shootings when he visited Western states on Monday and Tuesday to talk about Social Security. Perino said that the president tried to call Jourdain a couple of times on Thursday but couldn't reach him. "I know that he got voice mail a couple of times," she said.

Perino said federal assistance to Red Lake so far has come from the FBI, which has sent 10 victims specialists to evaluate the community's needs for grief counseling, funeral arrangements and other financial help. She said the FBI has more than $200,000 to help victims of mass violence and can request more from the Justice Department Office for Victims of Crime.