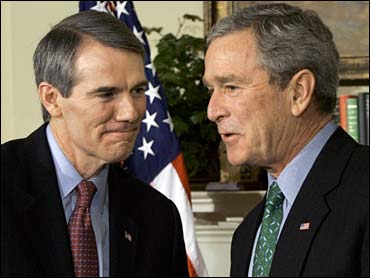 President Bush on Thursday named Rep. Rob Portman of Ohio to be U.S. trade representative, the administration's top salesman for free-trade agreements around the world.

"As an Ohioan, Rob knows firsthand that millions of American jobs depend on exports, including one in every five factory jobs," Mr. Bush said in announcing his choice of Portman at a White House ceremony in the Roosevelt Room.

"To keep our economy growing and creating jobs we need to continue opening foreign markets to American products. Rob knows that America's farmers and workers can compete with anybody any time any where in the world so long as the rules are fair."

Appearing with his wife and children, Portman said his young daughter admitted that she didn't know what a U.S. trade representative did, but said she told him, "'Dad, it sounds like a really neat job,' and it is."

If confirmed by the Senate, the 49-year-old Republican congressman from the Cincinnati area would replace Robert Zoellick, who has become Condoleezza Rice's top deputy at the State Department. As one of Mr. Bush's chief links to Congress on trade, tax and other issues, Portman has been a strong advocate of free trade even though he comes from a state that has been hit hard by job losses.

The next trade representative will face a tough fight in Congress to win approval for the Central American Free Trade Agreement. CAFTA would remove trade barriers between the United States and five Central American countries plus the Dominican Republic.

While the administration sees the pact as a continuation of its efforts to open markets for American manufacturers and farmers, it has attracted opposition from groups ranging from organized labor to U.S. sugar producers and textile manufacturers.

In Congress, Portman has served since 2001 as the official liaison between the White House and House leadership. In that role, Portman frequently is called upon to move Bush-backed legislation through the House, such as the bill creating the Department of Homeland Security.

Portman, who lives in the Cincinnati suburb of Terrace Park with his wife, Jane, and three young children, was an associate counsel in the White House during the administration of Mr. Bush's father and eventually became director of its Office of Legislative Affairs.

When George W. Bush took office in 2000, Portman's name turned up on the short list for several administration jobs, including secretary of commerce and director of the Office of Management and Budget. He is a member of the House Ways and Means Committee, where he has concentrated on tax and finance issues, such as IRS reform.

Portman was elected to Congress in a special election in 1993, following the abrupt departure of Rep. Bill Gradison, who resigned to head a health insurance lobbying group. He was re-elected last year with 72 percent of the vote. For Mr. Bush's re-election, Portman served as the campaign's communications director for Ohio. He also helped coach Vice President Dick Cheney for his debates, both in 2000 and again in 2004.

If approved as the next trade negotiator, Portman also will be trying to ignite new energy into negotiating a hemisphere-wide free trade zone — one of the administration's top trade goals — and finishing the round of global trade talks being conducted at Doha, Qatar, by the World Trade Organization.

Opponents of the administration's free trade efforts argue that the policies have failed to protect U.S. workers from unfair competition from countries with low wages and lax environmental laws. They point to a loss of 2.7 million manufacturing jobs during the past four years and record deficits.

The U.S. trade gap surged by 24.3 percent in 2004 to set a record for the third straight year at $617.1 billion and private economists said another record trade imbalance could be posted this year.

The next trade representative also would guide the administration's push to strike free trade deals with several countries in the Middle East — part of Bush's goal of creating a free trade zone through the region by 2013.

The administration believes that expanded trade with the United States will bolster economic growth in the region and help support Mr. Bush's goals of fighting terrorism and spreading democracy in that part of the world.

During his stint in the post, Zoellick, known as a tireless administration loyalist, helped win congressional approval for Trade Promotion Authority, which allows the administration to negotiate new trade deals. That legislation had been stalled for most of the Clinton administration. With that authority, Zoellick completed free trade negotiations with countries including Australia, Chile and Singapore.