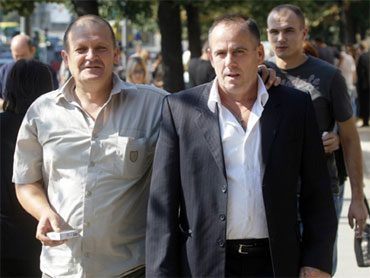 Mr. Bush selected Friedman last week, but his appointment had been delayed because of questions about his health and huge investment portfolio. Conservatives had used the delay to challenge his commitment to conservative tax-cutting doctrine.

Lindsey and O'Neill had been widely criticized for being poor spokesmen for the president's policies. Pitt left under fire for not telling other SEC commissioners that his pick to head a new accounting board had links to a company with accounting problems.

Friedman will now head the president's National Economic Council. Both Snow and Donaldson require Senate confirmation, but Friedman does not.

On Tuesday, Mr. Bush said restoring confidence in the markets was essential to the country's economic well-being. Friedman, a former Goldman Sachs chairman, could help him convince Wall Street that he has an ear for their needs.

But last week's resignations underscore the challenges Mr. Bush will face getting his package, with as much as an additional $300 billion in tax cuts, approved by Congress.

Based on his background as the head of a business group that backed government deficit reduction efforts in the mid-1990s, Snow is likely to join Friedman in challenging tax cuts that threaten to put the government on course to long-running deficits, just as O'Neill did.

Officials, who spoke on condition of anonymity, said the major tax cuts the administration was considering were accelerating the personal tax rate reductions scheduled to take effect in 2004 and 2006; boosting tax breaks to encourage businesses to invest more, and lowering the tax on stock dividends, long a Republican goal.

"He's got just about everything Wall Street could have asked for, but most of all he's got a history and a perception by Wall Street of integrity," Mike Holland of Holland and Company tells CBS News Correspondent Anthony Mason.

Reaction to the president's selection of Snow have been generally favorable, although Democrats complained that it was not the personnel but the administration's policies that needed to be changed and some critics said Snow had not excelled in corporate skills when running CSX.

Friedman is a product of Cornell University and Columbia Law School. His first job was as a clerk to a federal judge, after which he joined Goldman Sachs. He rose to head the divisions covering investment banking and mergers, and then became co-CEO in 1987 and co-chairman in 1990.

Friedman also serves on the board of trustees at Columbia, the executive committee of the Brookings Institution and the President's Foreign Intelligence Advisory Board. He belongs to the Council on Foreign Relations, the National Bureau of Economic Research and the Concord Coalition, an organization for fiscal conservatives.

He gave $76,000 to political campaigns in the past five years, the vast majority to Republicans.