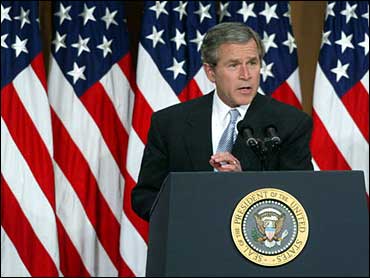 President Bush on Wednesday unveiled his vision of a peaceful post-war Mideast. The landscape included a democratic Iraq, an independent Palestinian state and an Israel recognized by its Arab neighbors.

While saying the Iraqi regime led by Saddam Hussein still has time to avoid war, Mr. Bush told conservative backers that U.S. troops are ready for battle and spoke and some length about his plans for Iraq once Saddam is gone.

"The United States has no intention of determining the precise form of Iraq's new government. That choice belongs to the Iraqi people," Mr. Bush told the American Enterprise Institute. "Yet we will ensure that one brutal dictator is not replaced by another."

The address came at the end of a day marked by intense diplomatic activity, as Mr. Bush struggled to find votes in favor of a war-making resolution at the United Nations Security Council. The United States, Britain and Spain need nine votes and no vetoes to pass the measure.

Answering critics who say war would destabilize the region, Mr. Bush predicted there would be a "new stage for Middle East peace" once Saddam loses power.

Iraq would no longer be a threat to dominate the region with weapons of mass destruction, Mr. Bush said, and he accused Saddam of financing suicide bombers, a charge Iraq has denied.

"A liberated Iraq can show the power of freedom to transform that vital region, by bringing hope and progress to the lives of millions," Mr. Bush said.

Mr. Bush sought to prepare the nation for the costs of conflict — both financially and in soldiers' lives, calling for a "sustained commitment from many nations, including our own."

A senior Defense Department official said it will cost $60 billion to $85 billion for military operations in Iraq and elsewhere.

"We will remain in Iraq as long as necessary, and not a day more," Mr. Bush said.

Answering critics who say war in Iraq will destabilize the Middle East, Mr. Bush said: "A new regime in Iraq would serve as a dramatic and inspiring example of freedom to other nations of the region."

Neither he nor his advisers explained why the Middle East peace process made no major advances while Saddam was contained in the 1990s. He did not mention other nations tied to unrest in the Middle East, such as Iran, but said removing Saddam would "signal to outlaw regimes that in this new century the boundaries of civilized behavior will be respected."

Mr. Bush said Saddam's removal will give Israelis and Palestinians a chance to bury their differences in a more stable environment.

"The safety of the American people depends on ending this direct and growing threat," he said.