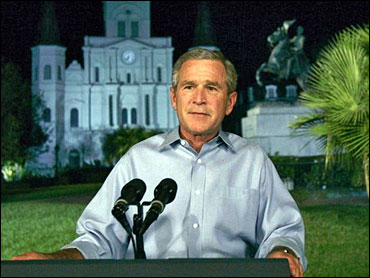 President Bush is urging Congress to approve a massive reconstruction program for the hurricane-ravaged Gulf Coast and promising that the federal government will review the disaster plans of every major American city.

It was the president's attempt to get beyond the failures following Hurricane Katrina and snatch the initiative, reports CBS News White House Correspondent Bill Plante. Speaking to the nation from the heart of New Orleans, Mr. Bush promised massive federal help to reconstruct the Gulf area.

"There is no way to imagine America without New Orleans, and this great city will rise again," the president said from the French Quarter's Jackson Square.

"Tonight I also offer this pledge of the American people: Throughout the area hit by the hurricane, we will do what it takes, stay as long as it takes, to help citizens rebuild their communities and their lives," President Bush said.

For evacuees, Mr. Bush promised continued help to locate loved ones and to find housing in apartments or temporary housing.

"Our goal is to get people out of shelters by the middle of October," he said.

In a few days, residents will begin moving back into the city, speeding the revival of the economy in places like the French Quarter — the bawdy enclave that suffered relatively minor damage in the hurricane but is still without electricity.

Mayor Ray Nagin announced plans Thursday to reopen some of New Orleans' most vibrant and least flood-ravaged neighborhoods over the next week and a half, including the French Quarter. The move could bring back more than 180,000 of the city's original half-million residents.

Federal funds, said the president, will provide most of the money for repairing roads, bridges, schools and water systems. But the states and cities will take the lead in planning their rebuilding. And, mindful that so many of the hardest hit poor were African-American, Mr. Bush addressed the race issue.

"That poverty has roots in a history of racial discrimination, which cut off generations from the opportunity of America," the president said in his speech. "We have a duty to confront this poverty with bold action."

Saying he would listen to good ideas from anyone, the president called on Congress to pass three new programs, reports Plante: