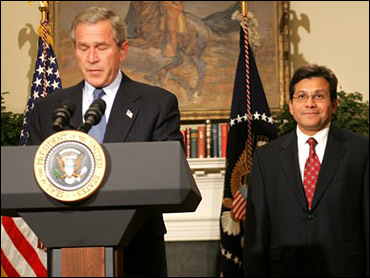 Mr. Bush capped off his nomination speech in the Roosevelt Room of the White House Wednesday afternoon by hugging Gonzales, a former Texas confidant whom the president referred to as a "great friend."

Gonzales thanked Mr. Bush, saying that today is a day of "conflicting emotions" for him, because if confirmed he will "never drive to work every day to the White House, nor interact as closely with this remarkable White House staff, including my great team in the counsel's office."

Gonzales would become the first Hispanic attorney general if he is confirmed by the Senate.

Attorney General John Ashcroft announced his resignation on Tuesday, along with Commerce Secretary Don Evans, another Texas friend of the president's.

"His sharp intellect and sound judgment have helped shape our policies in the war on terror," Mr. Bush said of the man who has served as the White House's top lawyer over the past four years.

In an announcement in the Roosevelt Room of the White House, Mr. Bush touched on Gonazles' personal story. He grew up poor in a family of eight children in a two-bedroom house in Texas.

Now in line to be the 80th man to hold the Cabinet post, Gonzales said: "Just give me a chance to prove myself,' that is a common prayer for those in my community. Mr. President, thank you for that chance."

Gonzales, 49, has long been rumored as a leading candidate for a Supreme Court vacancy if one develops. Speculation increased after Chief Justice William H. Rehnquist announced he has thyroid cancer.

At his appearance with Bush, Gonzales made reference to his years working in the court system.

"As a former judge, I know well that some government positions require a special level of trust and integrity. The American people expect and deserve a Department of Justice guided by rule of law."

Gonzales' career has been linked with Mr. Bush for at least a decade, serving as general counsel when Mr. Bush was governor of Texas, and then as secretary of state and as a justice on the Texas Supreme Court.

Similarities to Ashcroft regarding his advice to the administration on enemy combatant interrogations will almost certainly subject Gonzales to scrutiny from the Senate during his confirmation hearings, according to CBS News analyst Pamela Falk. Gonzales has been at the center of developing Mr. Bush's positions on balancing civil liberties with waging the war on terrorism — opening the White House counsel to the same line of criticism that has dogged Ashcroft.

For instance, Gonzales publicly defended the administration's policy — essentially repudiated by the Supreme Court and now being fought out in the lower courts — of detaining certain terrorism suspects for extended periods without access to lawyers or courts.

He also wrote a controversial February 2002 memo in which Bush claimed the right to waive anti-torture law and international treaties providing protections to prisoners of war. That position drew fire from human rights groups, which said it helped led to the type of abuses uncovered in the Abu Ghraib prison scandal.

"As liaison for Mexican border and migration issues during the President's tenure as Governor of Texas, Alberto Gonzales' appointment will certainly raise the profile of the stalled Mexico negotiations which the Administration began in the first months of his first term," Falk said.

Some conservatives also have quietly questioned Gonzales' credentials on core social issues. And he once was a partner in a Houston law firm which represented the scandal-ridden energy giant Enron.

After a National Security Council meeting, Mr. Bush was sitting down Wednesday with Secretary of State Colin Powell, another figure being closely watched for signs of whether he will stay or go.

Powell is widely believed to be leaving the Cabinet, but he has remained noncommittal about his intentions.

The Los Angeles Times reported Wednesday that people close to Powell say he may decide to remain in his post, at least for several months.

In other Cabinet developments: