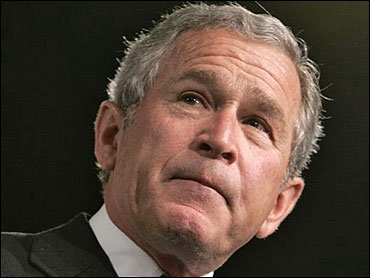 In what was billed as a major speech on Iraq, President Bush said Wednesday that Iraqi troops are increasingly taking the lead in battle but that "this will take time and patience."

But Mr. Bush refused again to set a timetable for a U.S. withdrawal, saying conditions in Iraq will dictate when American forces can come home. He said setting a deadline to pull out is "not a plan for victory."

Mr. Bush said the U.S. military presence in Iraq is set to change, by making fewer patrols and convoys, moving out of Iraqi cities and focusing more on specialized operations aimed at high-value terrorist targets.

"As Iraqi forces gain experience and the political process advances, we will be able to decrease our troop level in Iraq without losing our capability to defeat the terrorists," the president told a supportive audience at the U.S. Naval Academy.

But Mr. Bush was emphatic in stating that the decision on troop levels will be made by American commanders and "not by artificial timetables set by politicians in Washington," reports CBS News correspondent Mark Knoller.

Even before the president finished speaking, Senate Democratic Leader Harry Reid issued a statement claiming that Mr. Bush "recycled his tired rhetoric of 'stay the course' and once again missed an opportunity to lay out a real strategy for success in Iraq that will bring our troops safely home."

The Nevada senator charged that Mr. Bush failed to meet a call by the Senate to tell Americans the administration's strategy for success in Iraq.

House Democratic leader Nancy Pelosi embraced a call by a prominent defense hawk in her party to immediately begin a withdrawal. Two weeks ago, Rep. John Murtha, D-Pa., set off a firestorm when he said a complete pullout should be achieved in six months.

"The status quo is not working," Pelosi said Wednesday.

"There needs to be a full-court press of information available" to Congress and the public, agreed Sen. Richard Lugar, R-Ind., chairman of the Foreign Relations Committee.

In his speech, Mr. Bush openly acknowledged that Iraqi forces have not always performed well in combat but have made substantial progress in the past year. He said there had "some setbacks in standing up a capable Iraqi security force, and their performance is still uneven in some areas."

CBS News correspondent Lara Logan reports that Iraqi soldiers complain they have to buy their own uniforms and pay for their own body armor because the government equipment is such poor quality. One commanding officer told her that the terrorists are better armed than they are.

Some military analysts wonder if the mission to defeat terrorists will ever be complete, reports CBS News chief White House correspondent John Roberts. A team from the Army War College warned this week that the U.S. may never be able to train an Iraqi force capable of securing the entire country — regardless of how long the troops stay.

But Mr. Bush said many Iraqi forces have made real gains over the past year.

The speech did not break new ground or present a new strategy. Instead, it was intended to bring together in one place the administration's arguments for the war and its strategy on a military, economic and political track. The president's address was accompanied by the release of a 35-page White House document titled "National Strategy for Victory in Iraq." (.pdf)

"Americans should have a clear understanding of this strategy," Mr. Bush said. He said the document was an unclassified version of the strategy that was being pursued in Iraq.

Mr. Bush said that Iraqis are stepping forward to provide security for their embattled country, torn by suicide bombings, kidnappings and other violence. "Iraqi forces have made real progress," the president said. "We will stay as long as necessary to complete the mission. If our military leaders there tell us we need more troops, I will send them."

He said 40 Iraqi combat battalions are now taking the lead in joint operations with coalition troops, while 80 others are capable of support operations. Yet Pentagon officials recently said only one battalion - about 700 men - is fully capable of fighting alone, reports Roberts.

"They're helping to turn the tide in the struggle in freedom's favor," the president said.

Turning to criticism at home, Mr. Bush said, "Some are calling for a deadline for withdrawal. The many advocating an artificial timetable for withdrawing are sincere. But I believe they're sincerely wrong.

"Pulling our troops out before they achieve their purpose is not a plan for victory.

... To all who wear the uniform, I make you this pledge, America will not run in the face of car bombers and assassins so long as I am your commander in chief," he declared.

The Naval Academy speech is the first in a series of speeches the president is delivering between now and the Dec. 15 Iraqi election to outline political, security and economic strategies for Iraq.

The 35-page fighting strategy released Wednesday maintains increasing numbers of Iraqi troops have been equipped and trained, a democratic government is being forged, Iraq's economy is being rebuilt and U.S. military and civilian presence will change as conditions improve.

"We expect, but cannot guarantee that our force posture will change over the next year, as the political process advances and Iraqi security forces grow and gain experience," it said. "While our military presence may become less visible, it will remain lethal and decisive, able to confront the enemy wherever it may organize"

The White House's emphasis on the readiness of Iraqi security forces comes at a time when continued violence in Iraq and the death of more than 2,000 U.S. troops have contributed to a sharp drop in his popularity.

Sixty-two percent of Americans, in an AP-Ipsos poll taken in November, said they disapproved of the presidents Iraq policy. Thirty-seven percent approved of his policy — down from 43 percent in May. Mr. Bush's overall job approval rating is at 37 percent, the lowest level of his presidency.