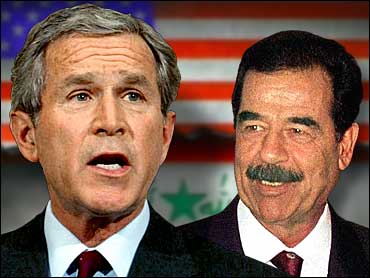 Distancing himself from remarks by Vice President Cheney, President Bush said Wednesday there was no evidence that Saddam Hussein was involved in the terrorist attacks of Sept. 11, 2001 — disputing an idea held by many Americans.

Mr. Bush spoke with reporters after speaking with leaders of Congress about energy legislation.

The president's comment on Saddam was in line with a statement Tuesday by Defense Secretary Donald Rumsfeld, who said he not seen any evidence that Saddam was involved in the attacks.

Yet, a new poll found that nearly 70 percent of respondents believed the Iraqi leader probably was personally involved. Rumsfeld said, "I've not seen any indication that would lead me to believe that I could say that."

Critics have said the administration has tried to create the impression of Saddam's involvement in the attacks, without directly making such a claim, in order to boost public support for the war against Iraq.

On Sunday, Vice President Dick Cheney said that success in stabilizing and democratizing Iraq would strike a major blow at the "the geographic base of the terrorists who have had us under assault for many years, but most especially on 9-11."

And Tuesday, in an interview on ABC's "Nightline," White House national security adviser Condoleezza Rice said that one of the reasons Mr. Bush went to war against Saddam was because he posed a threat in "a region from which the 9-11 threat emerged."

In an appearance on NBC's "Meet the Press," Cheney was asked whether he was surprised that more than two-thirds of Americans in a Washington Post poll would express a belief that Iraq was behind the attacks.

"No, I think it's not surprising that people make that connection," he replied.

Despite such assertions, the administration has never proved a prewar link between Saddam and the terrorist network. Instead, officials usually stick to assertions about Abu Musab al-Zarqawi, a senior bin Laden associate whom U.S. officials have accused of trying to train terrorists in the use of poison for possible attacks in Europe, running a terrorist haven in northern Iraq an area outside Saddam's control before the war and organizing an attack that killed an American aid executive in Jordan last year.

Indeed, Mr. Bush cited al-Zarqawi to back up his claim of al Qaeda ties to Saddam.

"Al-Zarqawi, al Qaeda operative, was in Baghdad," he said.

USA Today reports U.S. officials say they have some evidence suggesting a suspect in the 1993 World Trade Center bombing, Abdul Rahman Yasin, received money and housing in Iraq. But there is disagreement over the strength of the evidence, and the links between Yassin and al Qaeda are tenuous.