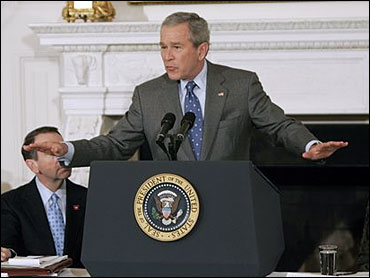 Republican governors are openly worrying that the Bush administration's latest stumbles — from the natural disaster of Hurricane Katrina to those of its own making on prescription drugs and ports security — are taking an election-year toll on the party back home.

The GOP governors reluctantly acknowledge that the series of gaffes threatens to undermine public confidence in President Bush's ability to provide security, which has long been his greatest strength among voters.

"You've got solid conservatives coming up speaking like they haven't before, it's likely that something's going on at the grass roots," said Republican Mark Sanford of South Carolina. "Whether it's temporary or not remains to be seen."

The unease was clear in interviews with more than a dozen governors over the weekend, including nearly half of the Republicans attending the winter meeting of the National Governors Association. The annual conference was taking place in a capital enthralled by the political firestorm over government plans to approve takeover of operations at some terminals at six U.S. ports by a company owned by the United Arab Emirates government.

Despite the discomfort, however, Republican governors gave the president a rock-star welcome as the headliner at a glitzy Monday night reception that added $9.6 million to GOP campaign coffers for fall races. "I thank you for your steadfast support," Bush told his statehouse colleagues.

Democrats see opportunity, and even those in conservative states say the administration's missteps will have a ripple effect politically at home. "I do think there's a considerable degree of skepticism about what's been happening at the federal level," said Democrat Kathleen Sebelius of Kansas. "If you didn't pick it up on Katrina, you did when you tried to help your parents" get drugs through the new Medicare program.

But it wasn't Bush's political opponents alone who saw weaknesses. So did his allies — listing the days of chaos in New Orleans after the hurricane, the nationwide confusion over the drug prescription program that forced many states to step in to help seniors get medications, and the ports security debacle that has drawn criticism from leading Republicans in Congress and the states.

"I don't think he was well served on the port issue by the bureaucracy," said Republican Dirk Kempthorne of Idaho, who is leading a united front of governors pushing back on potential reductions to National Guard forces. "He's at the forefront on national security. When you combine this flap on the ports, and these potential cuts on the military, you need to make sure that issue doesn't slip away. It's one of his strengths."

He also said the lack of communication from the administration on the Guard issue has been a problem. "There has been too much we have learned outside the loop. It's time we be inside the loop."

Republican Bob Taft of Ohio offered judgment on Katrina: "This is hindsight, but it was a mistake to bury FEMA under the Department of Homeland Security."

In his state, where manufacturing job losses have left much of the Midwest lagging behind the improved economies that much of the rest of the country has seen in the past two years, the economy plays a bigger role. "There's a sense it's more wrong direction than right track. That affects how they feel about the president, it affects how they feel about anybody in power. It's bound to play some role in the elections" for Congress and the governors race.

Other Republican governors said that while constituents back home were paying attention, much could change for the better before elections nine months off.

The Medicare program left several governors shaking their heads, though they said efforts to improve it were helping. "Probably the design of the plan could've been better," said Republican Don Carcieri of Rhode Island. Bush has called for steps to limit the confusion. Still, Carcieri was sure voters would forgive, both on the drugs and on the hurricane response. "They're more understanding of that kind of thing. They understand they're only human."

The bigger problem, as he and several others saw it, is Iraq. "The biggest cumulative effect weighing on everybody is the war," Carcieri said.

Even governors from parts of the country where support remains rock solid said they've seen a change as the months, and the deaths, piled up.

"What was ebullient before has now — it's a more muted response. (Support for the war) still may be past the 51 percent mark, but it's a quieter level," Sanford said.

Bush's public support, already low, may be dipping further amid the debate over port security and the growing violence in Iraq. Public approval of Bush's handling of the war on terror dipped from 52 percent in January to 43 percent in a CBS News poll released Monday that indicated his overall support was slipping as well.

Republican Haley Barbour of Mississippi said midterm elections for second-term presidents are historically disastrous for parties in power, a fact that has Republican governors skittish about November. "Anybody with a brain in their heads knows that '06 historically could be a weak year for Republicans," said the former chairman of the Republican National Committee. "It has less to do with the weakness of the president."

For Republican Mitch Daniels of Indiana, who served in the administration as budget director and left to run for governor, the stumbles are undeniable but must be seen in context. "There's a lot of lousy luck involved," he said. "I'm not saying the White House hasn't had better days, but I'm probably not nearly so hard on them as most."