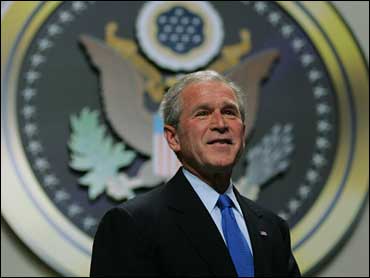 Seeking to energize party loyalists, President Bush on Wednesday gave his most extended public support to Sen. John McCain, his former foe for the White House. The president said McCain is the only candidate in the race who can face tough decisions and "will not flinch."

In a full-throated fundraising appearance for Republicans, Mr. Bush never mentioned the name of McCain's opponent in the presidential race, Democratic Sen. Barack Obama. But his critiques of Obama and Democratic leaders in Congress were clear as he turned their themes of "change" and "hope" against them.

Mr. Bush presided over an annual dinner at the cavernous Washington Convention Center, the last such fundraiser of his presidency. This one raised $21.5 million for Republican House and Senate candidates, an amount that easily topped last year's total but fell short of figures raised in earlier years.

The ostensible goal was to help the Republican Party win back Congress. In the House, where every seat is up for election this year, the Democrats hold an edge of 37 seats. In the Senate, where one-third of seats are on the ballot, the split is 49-49, with two independents who caucus with the Democrats.

Yet Mr. Bush put much of his energy in rallying support for McCain, mentioning his name time and again. McCain, the longtime Arizona senator, ran against Mr. Bush in 2000 but lost in the Republican primary. He eventually backed both of Bush's presidential bids and is getting the president's support in return.

"In trying times, America needs a president who has been tested and will not flinch," Mr. Bush told an audience of roughly 3,400 people.

Mr. Bush and McCain rarely appear in public together — the senator was campaigning in Missouri and Illinois on Wednesday — and Mr. Bush's speeches on his behalf tend to come at GOP fundraisers that are closed to the media.

Mr. Bush took the chance to sharply criticize a Supreme Court ruling that allows detainees in Guantanamo Bay, Cuba, to challenge their indefinite imprisonment in U.S. civilian courts. Obama applauded the decision, while McCain derided it as one of the worst decisions in the country's history.

He said the best way to change that practice is to put Republicans in charge of the Senate and McCain at the helm of the White House.

Matthew Miller, a spokesman for the Democratic Senatorial Campaign Committee, said "all the campaign cash in the world won't fool voters into re-electing Republican senators who have overwhelmingly backed George Bush's failed agenda."

The president said that when the public starts to pay attention to the 2008 election this fall, they will rally behind Republican candidates because of their positions on taxes, national security and the "culture of life." He criticized Democrats for maintaining a defeatist attitude in the unpopular war in Iraq.

"The other side talks a lot about hope, and that sums up their Iraq policy pretty well," Mr. Bush said. "They want to retreat from Iraq and hope nothing bad happens. Wishful thinking is no way to fight a war."

Mr. Bush's approval ratings remain near record lows. His overall public approval stands at 29 percent, according to an AP-Ipsos poll conducted June 12-16. The approval rating for Congress is even lower, 23 percent.