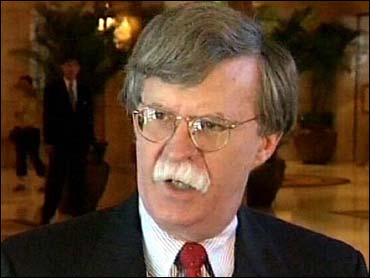 President Bush and GOP leaders may force a showdown vote on the confirmation of John Bolton before the full Senate if a Senate panel fails to endorse him as U.S. ambassador to the United Nations, the Washington Post reports.

Bolton, a veteran State Department official, has been dogged by allegations that he behaved abusively toward subordinates and that he tried to pressure career intelligence analysts into twisting facts for political reasons.

Second interviews are being requested with several people, including former ambassador to South Korea Thomas Hubbard, who has spoken only to GOP staff; former acting chief of the National Intelligence Council Stuart Cohen; and Neil Silver, director of the strategic proliferation office.

McLaughlin, Cohen, Silver and others have knowledge of incidents in which Bolton reportedly abused or tried to remove subordinates whose intelligence information he disputed.

Bolton's nomination stalled last week when Republicans on the panel expressed reservations amid new allegations that he abused his authority, mistreated subordinates and misled the committee.

Four Republicans — Sens. George Voinovich of Ohio, Lincoln Chafee of Rhode Island, Chuck Hagel of Nebraska and Lisa Murkowski of Alaska — have said they would like more time to review the allegations against Bolton.

On Tuesday Murkowski said, "At this point in time I have not been presented with anything that would change my mind" from supporting him. But she said she wouldn't decide until the committee votes, now scheduled for May 12.

Questions being sent to Bolton cover a wide swath of issues.

Sen. Christopher Dodd, D-Conn., is pursuing more information about Bolton's request for the identity of 10 U.S. officials involved in secret National Security Agency communications during the past four years.

Dodd spokesman Marvin Fast said Dodd is also seeking e-mails and logs relating to Bolton's communications with intelligence analysts over testimony he was preparing to give in 2002 about whether Cuba was developing chemical and biological weapons.

Bolton clashed with intelligence analyst Christian P. Westermann earlier in 2002, when the CIA worker tried to change language in a speech Bolton was giving about Cuba. The committee is seeking to interview Westermann again.

Gov. Bill Richardson of New Mexico asked the Foreign Relations Committee to find out if the NSA intercepted some of his conversations and whether Bolton sought access to them, said Bill Sparks, a spokesman for the governor.

These included conversations with former Secretary of State Colin Powell and North Korean diplomats, with whom he was talking in an effort to stop their nuclear weapons program.

Richardson, a Democrat and former U.S. ambassador to the United Nations, was in contact with the North Koreans in January 2003, shortly after becoming governor, and informed Powell of his efforts.