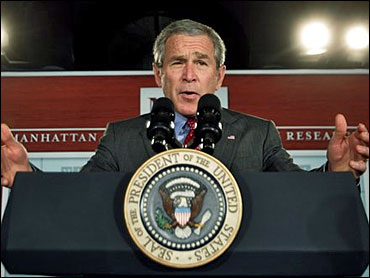 President Bush, urging the Senate to pass the line-item veto, on Tuesday criticized House Democrats who didn't back the measure even though they've called for federal spending restraint.

A line-item veto would allow the president to cut certain provisions in spending bills without vetoing the entire measure. The House passed such legislation last week 247-172. Thirty-five Democrats joined with most Republicans in voting for the bill.

The bill faces an uncertain future in the Senate. Democrats generally oppose the measure, and not all Republicans are excited about the idea. "We need to set politics aside" and pass a line-item veto, Mr. Bush said about the measure that the GOP embraces as a way to demonstrate election-year resolve to rein in federal spending.

Lawmakers from both parties who have reservations about the line-item veto contend it would shift too much power to the president, allowing him to try to cut projects proposed by his political enemies, or to use the threat of cutting projects in exchange for favorable votes on legislation the White House desires.

The bill that passed the House is a watered-down version of a more sweeping law that the Supreme Court struck down in 1998, saying it took too much spending authority away from Congress. Bush said the new legislation would meet the court's constitutional requirements.

The new version would let the president try to kill individual items contained in spending or tax bills that he otherwise signs into law. Congress would be required to vote on those specific items again. A simple majority in both the House and the Senate could override the president's objections.

"When the president sees an earmark or a spending provision that is wasteful or unnecessary, he can send it back to the Congress," Mr. Bush said. "And Congress is then required to hold a prompt up-or-down vote on whether to retain the targeted spending. In other words, the Congress is still in the process."

Nelson said he told the president that he used the line-item veto to rein in irresponsible spending when he was governor of Nebraska. "It works," said Nelson, governor from 1991 to 1999.