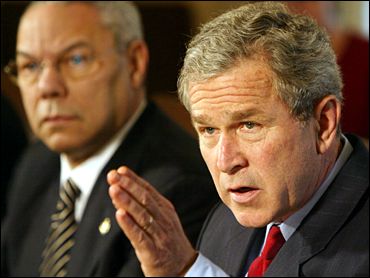 President Bush used the year's last Cabinet meeting to tout his administration's accomplishments during 2003, saying America is safer and more prosperous thanks to things he's done.

Mr. Bush listed the Iraq war, a new round of tax cuts and this week's signing of the Medicare overhaul as his major achievements.

"This has been an historic year. America is safer, America is more prosperous, America is a better place because of the actions this administration has taken," he told reporters at the White House after Thursday morning's meeting.

"In order to secure America, we liberated the people of Iraq from a brutal tyrant, and now we're in the process of rebuilding that country, along with others, and we're making good progress," he said.

He also claimed progress on the economic front, saying that thanks to his stimulus package, "Our economy is strong, it is vibrant, people are finding work. But we won't rest until everybody who wants to find a job can find one."

Mr. Bush also praised outgoing Housing and Urban Development Secretary Mel Martinez, whose last day is Friday, for serving the country "with class and distinction. I'm proud, Mel, to have had you on this team. Good job," the president said.

Martinez had reportedly been pressed by the White House to leave his post to mount a run for the U.S. Senate from Florida. He is the third departure from Mr. Bush's Cabinet. Treasury Secretary Paul O'Neill and Christie Whitman, head of the Environmental Protection Agency, have also departed.

After the session, which previewed themes the president will use for his re-election campaign, Mr. Bush headed straight to his last campaign fund-raiser of the year, a $1 million Republican luncheon in suburban Virginia.

The president is already well on the way to putting at least $170 million into his campaign war chest. And that's just for a primary season in which he's running unopposed.