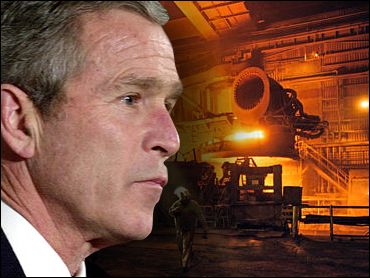 A senior Bush adviser, speaking on condition of anonymity, said several key aides and agencies, including the office of the U.S. trade representative, have recommended the president drop the tariffs that he imposed in March 2002 to ease foreign competition while the beleaguered U.S. steel industry consolidates and restructures.

A small number of tariffs might be left in place on specialty steel products, according to an industry official who has held discussions with key members of the administration. But he said that was beginning to look less and less likely.

Asked if the tariffs would be lifted, the industry official said, "Absolutely, that is for sure."

The official, who spoke on the condition of anonymity, said the threat of retaliation by the European Union tipped the balance. "The EU gets what it wanted," he said.

The White House said the matter was still being discussed with domestic steel producers, consumers and members of Congress.

The EU renewed its threat Monday to slap billions of dollars in retaliatory sanctions on U.S. products unless the Bush administration repeals all steel tariffs declared illegal by the World Trade Organization.

EU spokeswoman Arancha Gonzalez in Brussels said the 15-nation trading bloc will respond with $2.2 billion in sanctions on U.S. exports if the tariffs are not completely abolished, as demanded by the WTO.

"The U.S. knows this," Gonzalez said.

Mr. Bush was expected to act before the WTO's dispute settlement body meets Dec. 10. If the tariffs are still in place by then, the EU, Norway and Japan could retaliate five days later to protest the tariffs that are currently set to expire in March 2005.

Over the next two days, Mr. Bush is visiting two battleground states, Michigan and Pennsylvania, where voters are fiercely divided on the steel tariffs.

The tariffs endeared the GOP president to traditionally Democratic steelworkers in states such as Pennsylvania, Ohio and West Virginia. But coming on the heels of a slumping economy, the tariffs have angered owners and employees of small manufacturing companies that make up part of his GOP base in Michigan, Minnesota and Wisconsin.

"It's a very big decision for the president from the political standpoint," said Bill Green, a Pittsburgh-based Republican political consultant. "I understand the WTO pressure. But it's at least 60 electoral votes involved. That has to weigh heavily on this president."

But lawmakers who oppose the tariffs cheered reports that Mr. Bush would ultimately wipe out the steel sanctions.

"The last thing our economy needs right now is a trade war, and that's exactly what we would have gotten had the steel tariffs remained in place," said Rep. Jeff Flake, R-Ariz. "These steel tariffs were a glaring inconsistency in what is an otherwise very pro-free trade White House, and I'm glad they're gone."

"We shouldn't set aside our free trade principles to satisfy a small political constituency," Flake said.

Mr. Bush was hosting a fund-raiser Monday in Dearborn, Mich., a suburb of Detroit, where auto-parts manufacturers say the tariffs have hiked steel prices. The president is also expected to talk about the economy at steel-consuming Dynamic Metal Treating in Canton, Mich.

If the tariffs remain in place, steel consumers are likely to face a supply shortage, said Lew Leibowitz, attorney for the Consuming Industries Trade Action Coalition. CITAC opposes the tariffs.

"I can't find anyone who believes that the tariffs are going to be continued," said Leibowitz, who predicted the White House would announce its decision this week. "We're beginning to get a little optimistic."

But the president is not expected to release his decision until after an anticipated $1 million fund-raiser Tuesday's in Pittsburgh, America's "Steel City," which is co-hosted by U.S. Steel Chairman and CEO Thomas J. Usher.

Lifting the tariffs now, said U.S. Steel senior vice president Terrence Straub, could cost Mr. Bush a winning margin in Pennsylvania — a state he narrowly lost in 2000 and will have visited 23 times on Tuesday since taking office.

"They don't need but a handful of votes," Straub said. "If he lifts the relief, he forsakes that; he's walked away, he's squandered that opportunity. This would be, in our view, a broken promise by the White House."

Reports of the administration recommendation were first reported by The Washington Post, The New York Times and The Wall Street Journal.