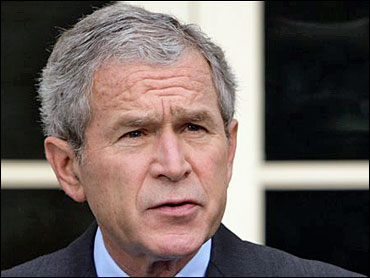 President Bush relaxed trade sanctions against North Korea and moved to take it off the U.S. terrorism blacklist on Thursday, but he remained skeptical about whether the communist regime would ultimately give up its nuclear weapons programs.

Six years after branding North Korea a part of his "axis of evil," Mr. Bush offered mostly symbolic concessions in exchange for Kim Jong Il's decision to hand over a long-awaited accounting of its nuclear bomb-making abilities.

"If they don't fulfill their promises, more restrictions will be placed on them," Mr. Bush declared, just a few hours after North Korea handed over 60 pages of documentation about its nuclear past to Chinese officials in Beijing.

What the North Koreans declared about its plutonium work and nuclear programs dating to 1986 was a slimmed down version of what the Bush administration initially sought. The document said nothing about the nuclear weapons they do have and about their uranium enrichment program, reports CBS News chief foreign affairs correspondent Lara Logan.

Furthermore, the document revealed nothing about how North Korea is proliferating nuclear technology around the world, reports Logan.

Still, Mr. Bush said he was pleased, calling the declaration a positive step in negotiations with a fickle regime that have been stop-and-go for years. Bush emphasized that he was keenly aware that Pyongyang had lied about its nuclear capabilities before.

Then he announced he was erasing trade sanctions imposed on North Korea under the Trading With the Enemy Act, and notifying Congress that, in 45 days, the administration intends to take North Korea off the State Department list of nations that sponsor terrorism.

"If North Korea continues to make the right choices it can repair its relationship with the international community ... If North Korea makes the wrong choices, the United States and its partners in the six-party talks will act accordingly," Mr. Bush said.

The White House announcement marked a turnabout of the U.S. hostile policy toward impoverished North Korea. Better relations with Washington could eventually improve dire economic conditions for the country's 23 million people who suffer food shortages and blackouts. But with many steps to go in North Korea's disarmament process, that is unlikely to happen anytime soon.

To demonstrate that it is serious about forgoing its nuclear weapons, North Korea is planning the televised destruction Friday of a 65-foot-tall cooling tower at its main nuclear reactor at Yongbyon. The cooling tower is a key element of the reactor, but blowing it up - with the world watching - has little practical meaning because the reactor has already been nearly disabled.

Conservative Republicans, who want the U.S. to take an even tougher stance against the regime, were incensed.

"Profound disappointment" was the reaction of Rep. Ileana Ros-Lehtinen, R-Fla.

Other lawmakers from both parties took the position that the declaration, though six months late, was better than nothing. They argue that the long-running negotiations the United States, Japan, South Korea, China and Russia have been having with Pyongyang offer the best chance of eventual denuclearization of the Korean peninsula.

"But the regime's nuclear declaration is the latest reminder that, despite President Bush's once bellicose rhetoric, engaging our enemies can pay dividends," Kerry said.

"The reality is that there are so many other sanctions on North Korea because of its other behaviors that there's really no practical effect of taking them off the terrorist list," Gates said.

In the next 45 days - the congressionally mandated waiting period for removing North Korea from the terrorism list - the six negotiating partners will agree on how best to verify what the regime has declared. The North Koreans have said they will provide access to their facilities, including the reactor core and waste sites.

What is included in the 60-page declaration is just as important as what's not.

The declaration details the amount of plutonium the North produced, down to the gram. A senior U.S. official says North Korea claims to have produced an amount of plutonium in the low 40-kilogram range, including estimates of waste. That is enough to construct at least a half-dozen nuclear bombs, and is in line with U.S. intelligence estimates.