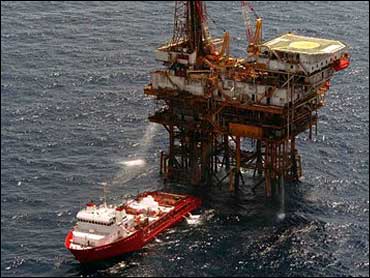 Putting pressure on congressional Democrats to back more exploration for oil, President Bush on Monday lifted an executive ban on offshore drilling that has stood since his father was president.

But the move, by itself, will do nothing unless Congress acts as well.

There are two prohibitions on offshore drilling, one imposed by Congress and another by executive order signed by the first President Bush in 1990.

The lifting of the ban is what the White House calls a "two-key" operation, reports CBS News White House correspondent Mark Knoller. The White House said Mr. Bush, trying to ease market tensions and boost supply, wanted Congress to act before he turned his key by rescinding the Executive Order.

"The only thing standing between the American people and these vast oil resources is action from the U.S. Congress," Mr. Bush said in a statement in the Rose Garden. "Now the ball is squarely in Congress' court."

Mr. Bush criticized Congress for failing to lift its own ban on offshore drilling. "Failure to act is unacceptable," the president said.

"And now Americans are paying at the pump," he declared.

Congressional Democrats, joined by some GOP lawmakers from coastal states, have opposed lifting the prohibition that has barred energy companies from waters along both the East and West coasts and in the eastern Gulf of Mexico. A succession of presidents, from Mr. Bush's father - George H.W. Bush - to Bill Clinton, have sided against drilling in these waters, as has Congress each year for 27 years. Their goal has to been to protect beaches and coastal states' tourism economies.

"This proposal is something you'd expect from an oil company CEO, not the president of the United States," said Sen. Barbara Boxer, D-Calif., chairwoman of the Senate Environment Committee. "The president is taking special-interest government to a new level and threatening our thriving coastal economy."

"President Bush has once again ignored the wise precedent set by his father and taken reckless action that has neither hope of reducing gas prices nor concern for long-term consequences," said Gene Karpinski, president of The League of Conservation Voters.

Asked if Mr. Bush's action alone will lead to more oil drilling, White House press secretary Dana Perino said, "In terms of allowing more exploration to go forward? No, it does not."

The president, in his final months of office, has turned to increased oil exploration among other options amid record gas-prices. None would have immediate impact on prices at the pump, according to White House officials, who say there is no quick fix. But starting action now would help, they say.

Mr. Bush's proposal echoes a call by Republican presidential candidate, Sen. John McCain, to open the Outer Continental Shelf for exploration. Democrat Barack Obama has opposed the idea and instead argued for helping consumers with a second economic stimulus package including energy rebates, as well as stepped up efforts to develop alternative fuels and more fuel-efficient automobiles.

"If offshore drilling would provide short-term relief at the pump or a long-term strategy for energy independence, it would be worthy of our consideration, regardless of the risks," spokesman Bill Burton said in a statement. "But most experts, even within the Bush administration, concede it would do neither. It would merely prolong the failed energy policies we have seen from Washington for thirty years."

Congressional Democrats have rejected the push to lift the drilling moratorium, accusing the president of hoping the U.S. can drill its way out a problem.

Mr. Bush says offshore drilling could yield up to 18 billion barrels of oil over time, although it would take years for production to start. Mr. Bush also says offshore drilling would take pressure off prices over time. In addition, the president has proposed opening the Arctic National Wildlife Refuge for drilling, lifting restrictions on oil shale leasing in the Green River Basin of Colorado, Utah and Wyoming and easing the regulatory process to expand oil refining capacity.

Senate Minority Leader Mitch McConnell, R-Ky., and other lawmakers have backed legislation to allow offshore exploration. Their measure would pursue other ways to expand energy sources, too.

"Now the only thing standing between consumers at the pump and the increased American energy they are demanding is the Democrat leadership in Congress," McConnell said. "We should act and act now."

Nearly half the people surveyed by the Pew Research Center in late June said they now consider energy exploration and drilling more important than conservation, compared with a little over a third who felt that way only five months ago. The sharpest shift in attitude came among political liberals.

Democrats say they are for drilling, but argue that oil companies aren't going after the oil where they already have leases. So why open new, protected areas? they ask. Democrats say there are 68 million acres of federal land and waters where oil and gas companies hold leases, but aren't producing oil.

"Americans are fed up every time they go to fill up and they're right to demand action. But instead of a serious response, President Bush and his allies simply repeat the same old line - more drilling," Democratic Rep. Chris Van Hollen said in the Democrats' radio address on Saturday.