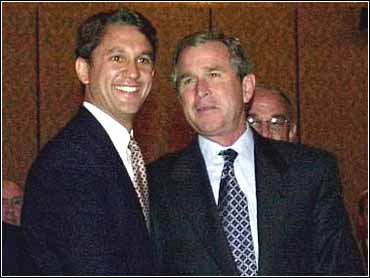 Despite an eight-year career in Congress, Lazio has suffered a sort of stature gap vis-a-vis the first lady, with detractors saying he is not "senatorial" enough. So one might have expected the Long Island congressman to make more of his moment on the marquee with Bush, who's proving popular in national polls.

But both men were apparently on autopilot for their appearance with New York Gov. George Pataki before a gathering of a few hundred members of the state's Conservative Party.

But the juice slowed to a trickle with Lazio's uninspired speech in support of Bush's missile defense plan, a big - perhaps too cosmic - national issue that drew some applause, but no appreciable excitement, from the local crowd.

"You don't buy an alarm after you've been robbed," Lazio said in arguing for an "effective missile defense system" that will "help Americans sleep well at night." (Lazio did not mention the recent failed test of a Pentagon protoype anti-ballistic missile system, which has skeptics thinking Bush's vision is not feasible.)

Lazio called Bush "my friend" and "brother," and said, "I have waited eight long years" for a Republican president. "Governor, I can tast it!"

When Bush stepped to the plate, he said that unlike Al Gore and Hillary Clinton, he and Lazio "don't mind being seen together," a rap against the Democratic duo who haven't done a public event together since February because their combined Clinton baggage exceeds the legal limit.

Bush was not expected to spend much time in New York despite its 33 electoral votes, because the conventional wisdom says the state is Gore's to lose. But even though Gore has a comfortable ten-point lead in the most recent statewide poll by Quinnipiac College, Bush said, "I think I've got a good chance of winning" New York and promised to come back.

Two protesters who interrupted Bush's speech by shouting, "Stop the racist executions!" were hustled out of the hotel ballroom. About a dozen Bush supporters, perhaps accustomed by now to this sort of thing, sprang to their feet in the front row of lunch tables and waved Bush signs to keep the TV cameras where they belong - on the candidate.

Bush, who has an awful lot on his mind what with choosing a running mate and planning a convention, must have wondered what he was doing in a room with Steve Forbes (remember him?), in a state that he probably won't win, shaking the hand of Lazio strategist Mike Murphy, who greenlighted a primary ad for John McCain that called Bush "a politician America can't trust."

The answer is in New York's multi-party system. In New York, Democrats have two million more registered voters than Republicans. Another two million registered voters are unaffiliated; and the balance belong to the half-dozen lesser parties that have lines on the Empire State ballot. The math suggests that even if Republicans win over all the registered independents, they still need every one of 350,000 votes New York conservatives have promised to deliver.