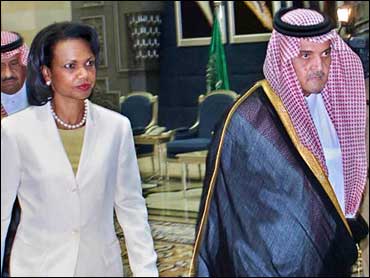 Announcing a "strike on the financial foundation" of terrorists, Mr. Bush said he had signed an executive order freezing the assets of 27 individuals and organizations.

"They include terrorist organizations, individuals, terrorist leaders, a corporation that serves as a front for terrorism and several nonprofit organizations," the president said in a Rose Garden appearance.

Mr. Bush said he signed the order one minute after midnight, adding, "This list is just the beginning."

Flanked by Secretary of State Colin Powell and Treasury Secretary Paul O'Neill, Mr. Bush said that the United States would work with foreign governments and "we're putting banks and financial institutions on notice."

Click here for a closer look at the Bush presidency.
O'Neill issued a warning to foreign banks: "We will punish you for providing the resources that make these evil acts possible."Mr. Bush said he's putting the financial world on notice, that anyone who does business with terrorists, or who supports or sponsors them, "won't do business with America."

"Money is the life blood of terrorist operations," he said. "Today, we're asking the world to stop payment."

He said he's hoping to turn terrorists against each other, and force them out of hiding, by starving them of their funding.

The president's executive order marked the first public step of the financial elements of his declared war on terrorism. He was working on the diplomatic front during the day, meeting with Canadian Prime Minister Jean Chretien at the White House.

The president did not mention Canadian cooperation in his address to Congress Thursday night, although Canada housed, fed and comforted thousands of American air travelers stranded there after terrorist attacks in Washington and New York Sept. 11. He did praise Britain, whose prime minister, Tony Blair, was an honored guest at the speech.

Chretien is under criticism from some at home who say he hasn't been bold enough in his response to the terror attacks.

He was expected to offer more of Canada's F-18 jet fighters for joint patrols of North American skies, along with naval support and possible replacement of Canadian soldiers for U.S. troops in peacekeeping duties in Bosnia.

Mr. Bush spoke with Russian President Vladimir Putin for nearly an hour over the weekend (their third conversation on the anti-terror campaign) and will see Japanese Prime Minister Junichiro Koizumi on Tuesday.

©MMI, CBS Worldwide Inc. All Rights Reserved. This material may not be published, broadcast, rewritten, or redistributed. The Associated Press and Reuters Ltd. contributed to this report