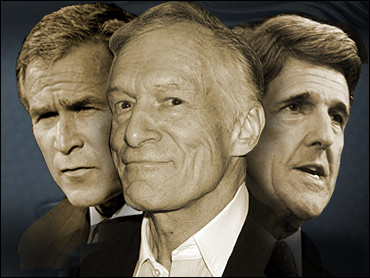 The two presidential contenders also share a widely known common relative, Playboy founder Hugh Hefner, who is the ninth cousin of both men (the number nine is a coincidence). Twice removed from Mr. Bush, Hefner is a slightly closer relation to Kerry, only once removed.

"Well I feel closer to Senator Kerry," Hefner chuckled, over the phone from the Playboy Mansion in Los Angeles.

"You know I'm an 11th generation direct descendent of William Bradford, who came over on the Mayflower, a direct descendent of a puritan," Hefner continued proudly, finding no irony in the fact. "I suppose that it is not a big surprise but it is certainly unique to be a relation to both candidates."

Previous research released last month found that Mr. Bush and his de facto Democratic challenger were 16th cousins. Now the two candidates expected to compete in one of the bitterest and certainly longest general elections in decades are nearly twice as close as first thought. Like brothers, more or less; well, more less than more.

"You never know, they may be closer, this is only what has been connected so far," said Bruce Harrison, who heads a group called Millisecond Publishing which puts out a line of ancestral history CDs from Waimea, Hawaii. "I hope it means that people will be nicer to each other and you always hope for a nicer campaign."

Millisecond Publishing's massive database collects family trees of notable figures. According to their research, the shared ancestors of both men are Thomas and Welthian Richards of Weymouth, Mass., early 17th century Plymouth Colony residents who were some of the original Pilgrims, emigrants from England.

Kerry's most quirky relation is Johnny Appleseed. Yes, there really was a Johnny Appleseed. Kerry and Appleseed are sixth cousins. Appleseed, whose real name was John Chapman, was born in 1774 and made a name for himself as a naturalist traveling the country for 50 years, growing, of course, apple trees among other things.

"Bush and Kerry might find it odd. They might not even like that they do share a common ancestor and I don't think they consider themselves relatives – only a genealogist would," Burroughs said. "But it is a really good piece of trivia."

Hefner, who also said he found his relationship to the two men interesting if not necessarily relevant, finds his link to Mr. Bush and Kerry through Major William Bradford. One of the Richards' daughters, Alice, married Bradford, and it's through their son, Lieutenant Thomas Bradford, that Hefner is descended.

The Playboy magnate, who said he is keeping up with the election, finds it all very funny. Neither candidate has recognized the other as a relation, but Hefner thinks they should and that the link would lead to a less combative election year.

"I hope they have a campaign that deals with the real issues and not personalities," Hefner said, adding that he would do his best to help Kerry raise money.

"I wish him well, he's our president," Hefner said, hoping both men would visit him at the Playboy Mansion for a little rest and relaxation. "I would be delighted to invite both President Bush and Senator Kerry for a family reunion," Hefner added, laughing to himself.