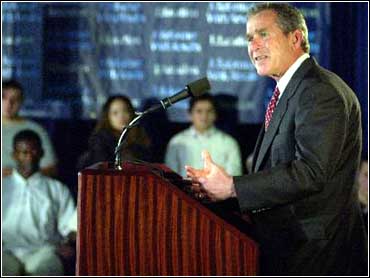 Texas Gov. George W. Bush trumpeted his commitment to education Tuesday, declaring that the country faces a "national emergency" of illiteracy. To combat that emergency, the governor proposed the somewhat un-Republican idea of spending $5 billion on a new federal program.

This was Bush's fourth major speech on education. The others dealt with teaching moral values, improving education for minority or disadvantaged children and setting higher standards while insisting on accountability.

The governor thinks education is one of his best issues. And polls show voters, particularly women voters, consider it a priority. That's why both Bush and Democratic rival Al Gore are clamoring for the title of "Education President."

Bush covered some familiar ground in his speech - the need for high standards and local control of schools, and giving parents the ability to move their children out of failing schools - but his proposals on battling illiteracy were new.

"Nothing is more fundamental than teaching our children how to read," Bush said. The crisis of illiteracy is national and "therefore requires a national response" - an unusual proposal in a party that stresses less federal involvement.

Bush is offering a new program called Reading First. It would allocate $1 billion each year to help teachers identify early reading problems (in kindergarten through second grade) with diagnostic tests. Teachers would get additional training and learn how to teach reading more effectively. And then these teachers would "intervene" to help problem readers. The end result, Bush hopes, will be that every child can read by the end of third grade.

Bush also wants to transfer the Head Start program from the Department of Health and Human Services to the Department of Education. Head Start - a rare federal program even Republicans seem to like - encompasses education, health and parental involvement services. By shifting it to the Education Department, Bush would bulk up and emphasize the program's literacy component.

There are already programs in place to improve literacy, but Bush says they're just "throwing money at the problem" without insisting on results. The vice president's education agenda, Bush complained, "has no plan for accountability. Without consequences, reform is a hollow shell."

The governor also sounded a return to his compassionate conservative mode, and drew a distinction between his plan and traditional Republican approaches. His plan "is different from those who say there is no federal role for education," said Bush. "I won't close down the Department of Education, but I will reform it. The goal is not to cut the most, but to improve the most."

Bush paraded his education views with a visit last week to Little Rock's Central High School, scene of a vivid confrontation over school integration in the 1950s. And he'll keep playing the theme this week, ith another major speech scheduled for Thursday on recruiting and training teachers.

Back in Washington, Vice President Gore argued that Bush's generous tax plan wouldn't leave any money for programs like Reading First or other education efforts.

"You can't propose an economic plan that results in devastating, slashing cuts to education and pretend you're not doing so," Gore said.

Bush's speech was full of optimism and determination; he didn't explain how his ideas would be funded. "This is a mission worthy of the president of the United States," he said as he wrapped up his speech. "It is a mission I will not miss."