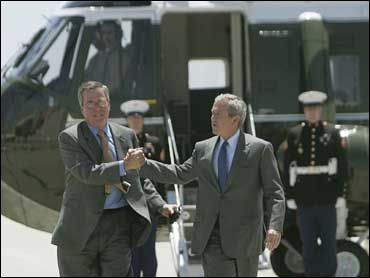 President Bush suggested Wednesday that he'd like to see his family's White House legacy continue, perhaps with his younger brother Jeb as the chief executive.

The president said Florida Gov. Jeb Bush is well-suited for another office and would make "a great president."

"I would like to see Jeb run at some point in time, but I have no idea if that's his intention or not," Mr. Bush said in an interview with Florida reporters, according to an account on the St. Petersburg Times Web site.

The president said he had "pushed him fairly hard about what he intends to do," but Jeb has not said.

"I have no idea what he's going to do. I've asked him that question myself. I truly don't think he knows," Mr. Bush said.

Jeb Bush, 53, will end his second term as governor in January. His brother George ends his second presidential term in January 2009. Neither can seek re-election because of term limits.

Jeb Bush has repeatedly said he is not going to run in 2008.

But even his own father said no one believes him when he says he's not interested in running at some point. Former President George H.W. Bush told CNN's "Larry King Live" last year that he would like Jeb Bush to run one day and that he would be "awfully good" as president.

The Florida governor laughed when asked about his father's comments last June. "Oh, Lord," he said and shook his head no. "I love my dad."

The brothers Bush appeared together Tuesday during the president's visit to the Tampa area. Gov. Bush was waiting on the tarmac when Air Force One arrived and greeted the president with a politician's handshake and "Welcome to Florida." The president brushed aside the formality and playfully adjusted his younger brother's necktie.

Jeb Bush introduced his brother at a retirement community in Sun City Center, where the president touted the new Medicare prescription drug benefit as the governor watched intently from a politically appropriate seat on stage right. They had a private lunch together with political supporters, then visited a fire station and appeared together before television cameras to express concern about wildfires that were blazing across the state.

The governor was not with the president during his visit to The Puerto Rican Club of Central Florida in Orlando Wednesday, the president's final stop on a three-day trip to the state. But the president was sure his brother still got some attention.

"Yesterday I checked in with my brother," President Bush said as he took the stage. "Make sure everything's going all right. I'm real proud of Jeb. He's a good decent man and I love him dearly."