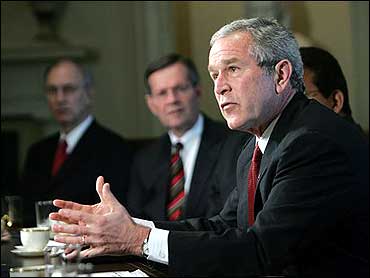 President Bush said Thursday that the standoff over Iran's suspected nuclear program is headed for the U.N. Security Council if Tehran continues to refuse to halt uranium enrichment.

"We'll see whether or not that is the firm position of their government," President Bush said after a meeting with his Cabinet at the White House. "If they continue their obstinance, if they continue to say to the world 'We really don't care what your opinion is," then the world is going to act in concert."

With Russian and Chinese support crucial to crafting a deal for Iran that also includes a threat of sanctions, Mr. Bush said that he "got a positive response" from Russian President Vladimir Putin during a conversation on Tuesday.

"We expect to Russia to participate in the United Nations Security Council," Mr. Bush said he told Putin. "We'll see whether or not they agree to do that."

He was less positive about his discussion of Iran earlier Thursday with Chinese President Hu Jintao.

"They understood our strategy," Mr. Bush said. "The most positive thing about all the conversations I had is there's uniform agreement that the Iranians should not have a nuclear weapon. And we'll discuss tactics and strategies to make sure the international community speaks with one clear voice."

Secretary of State Condoleezza Rice said that the United States and international partners are close to a deal that would offer Iran economic incentives if it gives up nuclear activities that could produce a bomb. Rice was meeting in Vienna with foreign ministers from the European nations that led stalled talks with Iran last year and would help present any new deal, and also with representatives of Russia and China.

The meetings come a day after the United States' surprise announcement that it is now willing to join the direct European talks with Iran, though only if Tehran suspends suspect activities and returns to the table. The shift in U.S. tactics was meant to offer the Iranians a last chance to avoid punishing sanctions.

Iran dismissed the offer as "a propaganda move."

The overture to join stalled European talks came after mounting pressure on the U.S. from European allies. The administration is convinced that Russia and China would support sanctions or other harsh measures if new talks fail to persuade Iran to abandon nuclear efforts that the West fears could lead to a bomb, a senior administration official said.

CBS News chief White House correspondent Jim Axelrod reports the United States has had no diplomatic ties with Iran and few contacts at all with its government since Islamic radicals took over the U.S. Embassy in 1979 and held diplomats for more than a year.

In the recent showdown about Iran's nuclear ambitions, the Bush administration has given no signal a major shift was in the works and it was ready to engage Iran directly, Axelrod reports.

Mr. Bush said "the choice is up to the Iranians."

"They've already said, by the way, that they're willing to suspend," he said. "This gives them a second chance to make sure their words mean something."

The package outlined Wednesday by Rice would be on the table for any new talks including the United States. Previous talks among Iran, Britain, France and Germany foundered last year.

Iran insists its nuclear work is peaceful and aimed at developing a new energy source.

Rice would not directly answer questions about whether those nations are committed to tough measures if the U.S. overture doesn't work.

She spoke of "tactical differences" and said, "I think you can be sure that our friends and our partners understand the importance of the step and the importance that the Iranians must now see of making a choice and making that choice clearly."

"The Rice announcement certainly throws the ball in Tehran's court," said CBS News foreign affairs analyst Pamela Falk from the U.N., "but it forces Russia and China to agree to eventual sanctions if Iran does not comply, and it is still unclear if they have agreed to that condition."

"It also requires a suspension of uranium enrichment by Iran," added Falk, "and one can expect to hear a negative response from Tehran."