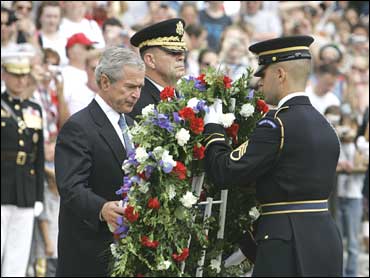 Speaking under overcast skies after laying a wreath at the Tomb of the Unknowns and meeting privately at the White House with the families of some fallen servicemen and women, Mr. Bush called the wars in Iraq and Afghanistan a part of the nation's destiny. He said they follow a rich tradition of similar American sacrifices throughout this country's history.

As people across the U.S. marked the day of remembrance, violence continued in Iraq where a suicide car bomber struck a busy commercial district in central Baghdad, killing at least 21 people and damaging a shrine revered by Sunnis and Shiites alike.

Speaking of the more than 368,000 buried through history at Arlington National Cemetery, Mr. Bush said, "Nothing said today will ease your pain. But each of you needs to know our country thanks you and we embrace you and we will never forget the terrible loss you have suffered."

"The greatest memorial to our fallen troops cannot be found in the words we say or the places we gather," he added. "The more lasting tribute is all around us."

A man holding a sign that said "Bring home our troops" stood at the bridge as the Bush's motorcade traveled over the Potomac River on its way to the cemetery. There, the president was greeted by tourists waving at his motorcade.

Troops with rifles fitted with bayonets stood at attention as his motorcade drove through rows of white tombstones, each marked with a tiny American flag. Smoke from cannon fire rose over the cemetery.

Bush laid a wreath of red, white and blue flowers at the Tomb of the Unknowns and stood, his hand covering his heart, during a drum roll and Taps. First Lady Laura Bush stood nearby with relatives of fallen troops.

In his speech, Mr. Bush said the freedoms that people enjoy in this country today "came at a great cost and they will surive only so long as there are those who are willing to protect them."

The president said that even after four years, many young men and women still volunteer for the U.S. armed forces.

"We've heard of 174 Marines recently, almost a quarter of battalion, who asked to have their enlistments extended," Mr. Bush said. "They want to serve their nation."

"Those who serve are not fatalists or cynics," he added. "They know that one day this war will end, as all wars do. Our duty is to make sure this war was worth the sacrifice" and that the fighting men and women succeeded — and "where tyrants and terrorists are frustrated and foiled ... where our nation is more secure from attack."

"On this day of memory, we mourn brave citizens who laid their lives down for our freedom," he said. "May we always honor them, may we always embrace them and may we always be faithful to who they were and what they fought for."