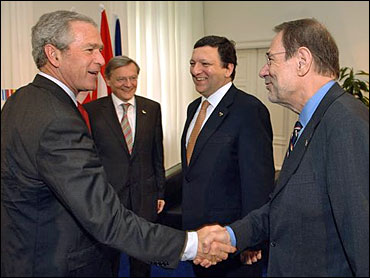 President Bush on Wednesday accused Iran of dragging its feet on a Western incentive package aimed at getting Tehran to suspend uranium enrichment activity.

Iranian President Mahmoud Ahmadinejad said earlier Wednesday that his country will respond by mid-August to the proposals presented to Tehran in early June by EU foreign policy chief Javier Solana. If Iran accepts the offer, it has to suspend its uranium enrichment — a process that can produce material for nuclear generators or bombs.

"We'll come to the table when they verifiably suspend. Period," Mr. Bush said at an annual U.S.-European Union summit here.

He said that the mid-August timetable "seems like an awfully long time" to wait for an answer. "It shouldn't take the Iranians that long to analyze what's a reasonable deal," Mr. Bush said.

"It should make people nervous when non-transparent regimes who have announced they have nuclear warheads, fire missiles," Mr. Bush said. "This is not the way you conduct business in the world."

He said he was encouraged that the Chinese government had spoken out against North Korea.

"I'm pleased that they are talking responsibility in dealing with North Korea," Bush said. "It's a very positive sign."

North Korea said in comments published Wednesday that its self-imposed moratorium on testing long-range missiles, dating to 1999, no longer applies because Pyongyang no longer is direct dialogue with Washington, suggesting it would hold off on any launch if Washington agreed to new talks.

Pyongyang has consistently pressed for a direct dialogue with the United States, while Washington insists it will speak to the North Koreans only in the format of six-nation nuclear talks.

Austrian Chancellor Wolfgang Schuessel said that if North Korea fires the missile, Europe would join the United States in condemning it.

"There will be a strong statement, strong answer from the international community and Europe will be part of it," Schuessel said.

Schuessel stressed U.S.-European cooperation in various areas, including the efforts to persuade Iran to give up its nuclear ambitions.

"Iran has to make the right choice," Schuessel said, adding that the European community welcomes U.S. involvement, particularly the recent historic signal that the United States is ready to join negotiations if Iran suspends enrichment activities.

Mr. Bush dismissed as "absurd" a recent poll by the Pew Research Center for the People and the Press in which European nations said that U.S. involvement in Iraq was a worse problem than Iran and its nuclear program.

MR. Bush, however, did acknowledge European concerns about the 460 detainees the United States is holding at Guantanamo Bay, but said some are "cold-blooded" killers that need to be brought to justice.

"I understand their concerns," Mr. Bush said. "I'd like to end Guantanamo. I'd like it to be over with."

Mr. Bush said that 200 detainees had been sent home, and that of the 460 remaining, most are from Saudi Arabia, Yemen and Afghanistan.

"There are some who need to be tried in U.S. courts," he said. "They're cold-blooded killers. They will murder somebody if they are let out on the street."