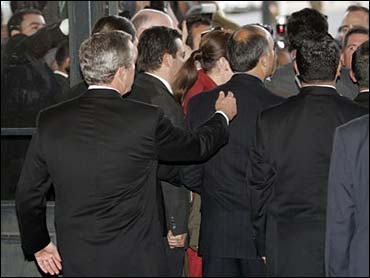 President George Bush was arriving in Colombia after a weekend summit of Asia-Pacific leaders in Santiago, Chile, during which he tried to mend relations in Latin America with fresh promises of immigration reform. He also intervened in a scuffle that erupted when Chilean authorities blocked the president's Secret Service agents from accompanying him into a dinner.

The incident, shown repeatedly on television worldwide, was an unlikely episode in an otherwise staid gathering of 21 Pacific Rim leaders at the Asia-Pacific Economic Cooperation summit.

As tempers flared and a shoving match ensued, Mr. Bush pushed into the commotion, grabbed his lead agent, Nick Trotta, and pulled him inside.

White House press secretary Scott McClellan, referring to the Saturday night scuffle, said, "The president is someone who tends to delegate but every now and then he's a hands-on kind of guy."

What was supposed to have been an elaborate state dinner with 200 people Sunday was downgraded to an official working dinner, reportedly because Chilean President Ricardo Lagos balked at Secret Service demands for guests to walk through metal detectors. The guest list for the working dinner was pared down to the leaders, their wives and top aides.

In a moment of levity, the leaders posed in colorful, hand-woven ponchos - following the summit tradition of wearing native garb of the host country.

Mr. Bush's four-hour stay Monday in the seaside city of Cartagena to see Colombian President Alvaro Uribe marks the final stop of a three-day Latin American trip.
Mr. Bush aims to highlight the benefits of American drug-fighting aid in Colombia and boost Uribe with a security-laden stop in the Andean nation.
"Colombia is making progress in the fight against terrorists who traffic in illegal drugs," Mr. Bush said Saturday in a radio address previewing the visit. "America is standing with the Colombian government to oppose the drug trade that destroys lives in our countries and threatens the stability of our hemisphere."

They pledged to "continue our work with a renewed sense of urgency, in order to achieve a balanced, overall outcome that will meet the high levels of ambition set for these negotiations."

The 148-nation WTO talks in Mexico last year collapsed in a dispute over reducing subsidies offered by rich countries to their farmers. But the negotiations resumed in July, and endorsement by APEC leaders to keep the momentum going is seen as important because APEC economies represent nearly half the planet's trade.

"A year ago we left Cancun with a complete failure," Chilean President Ricardo Lagos said. "And now, in great part owing to the efforts here, we have been able to move forward and we are looking to the future with optimism."

President Bush also endorsed APEC's efforts, saying: "We've got to reject the blocks and barriers that divide economies and people. And I believe, with the right policies, we can continue to grow."

The APEC leaders also approved a wide variety of counterterrorism measures aimed at improving commercial flight safety and making sure shipping and food stocks are safe from attacks by terrorists.

"We reaffirmed our determination to advance the prosperity and sustainable growth of our economies and the complementary mission of ensuring the security of our people," the leaders' statement said.

The leaders promised support for the early entry for APEC member nations Russia and Vietnam into the WTO, urging a prompt conclusion to negotiations.

The declaration also vowed renewed efforts to fight public and private sector corruption, which it termed "a serious threat to good governance and deters investment."

APEC started in 1989 as a gathering to boost trade among Pacific Rim nations, but its focus has broadened to include security matters in recent years.

While some have criticized the shift away from purely economic issues, several APEC leaders pointed out that business and security have become inseparable because of increased terrorism around the globe.

The document specifically recalled the "heinous acts" of terror this year in Beslan, Russia, where nearly 340 people — many of them children — died in a school siege, and Jakarta, Indonesia, where the Australian Embassy was bombed, killing nine people and wounding more than 170.

The statement noted last year's work on security issues in Bangkok, Thailand, while reiterating resolve to "collectively confront the threat of terrorism and its disastrous effects on the people and also the economies of the region."

Mr. Bush, meeting with Mexican President Vicente Fox on the sidelines of the summit, renewed support for changes to U.S. immigration law to allow undocumented laborers to work legally in the United States.

"What I got, and very firmly, is his will, his will to attend this issue," Fox told CNN.

Mr. Bush spent much of the time on the sidelines of summit trying to win international support to push North Korean leader Kim Jong Il to halt the communist country's nuclear weapons program. Six-nation talks on the issue have been unsuccessful so far, and the United States is pushing for another round early next year.

Meanwhile, protests, many of them violent, marred the days leading up to the summit.

Protesters say the push to expand free trade is little more than a ploy by rich nations and multinational corporations to boost profits and does not give meaningful benefits to poor nations mired in misery.