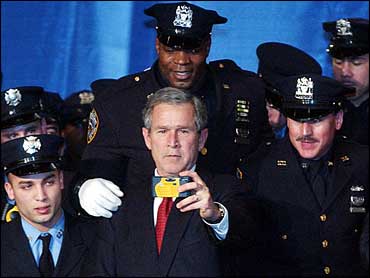 Defusing a brief controversy, President Bush has renewed his pledge that the government will give $20 billion to New York for its recovery from the Sept. 11 attacks.

On a visit to New York City Wednesday intended to highlight the $3.5 billion Mr. Bush proposed in his 2003 budget for local firefighters, police and emergency rescue squads, the president found himself trying to clear up earlier statements made by White House budget director Mitch Daniels.

Daniels had said that money for Sept. 11 victims would be counted against the $20 billion package. Mr. Bush clarified that Wednesday, saying that the Victims Compensation Fund is not included in that $20 billion.

"Mitch understands my pledge," he told reporters. "When I said $20 billion, I meant $20 billion."

Later, Mr. Bush stood between two stages filled with uniformed police officers in a Manhattan hotel ballroom and pledged to deliver the $20 billion he promised to the state's congressional delegation in the days after the terrorist attacks.

Mayor Michael Bloomberg replied: "Mr. President, we understand that a promise made is a promise kept. Thank you for sticking up for us. ... We will never forget."

Mr. Bush noted that Bloomberg, a Republican who just took office this year, has a background in finance and joked, "It's good you picked somebody who understands numbers."

The president said New York especially needs help restoring infrastructure and rebuilding roads damaged by the collapse of the World Trade Center towers. He expressed support for the "Liberty Zone" package, sponsored by Rep. Amo Houghton, R-N.Y., that passed the House at the end of last year. Congress adjourned before the Senate considered it.

"Congress needs to put the Liberty Zone and Liberty Bonds in a stimulus package and get it to my desk so I can sign it," Mr. Bush said. "It's important that New York City be vibrant and strong. ... I"m here to tell you the federal help is coming."

Days after the terrorist attacks, Mr. Bush told members of New York's congressional delegation that he would set aside $20 billion for New York. Congress appropriated $10.7 billion of that last year.

Daniels said Monday that he expected the victims fund set up by Congress to total about $5.4 billion for the New York area, although he allowed that figure could change depending on the number of people who apply. Sen. Charles Schumer, D-N.Y., said Daniels' statement that that amount would be counted against the $20 billion packag "verges on a breach of faith."

Later Wednesday, the president attended two fund-raisers for Pataki, who is seeking re-election. The governor's aides have estimated that the two events will raise almost $2 million for Pataki's re-election campaign.

Tickets for the first affair, to be held at Mayor Bloomberg's Upper East Side townhouse, were $15,000 for individuals and $25,000 for couples.

Afterward, the president, the governor and the mayor got back in their motorcades and headed over to the Sheraton Hotel, to host a party for 750 invited guests.

Earlier Wednesday, first lady Laura Bush did her part to boost New York's sagging tourism industry, taking in a museum and a restaurant with the state's first lady, Libby Pataki.