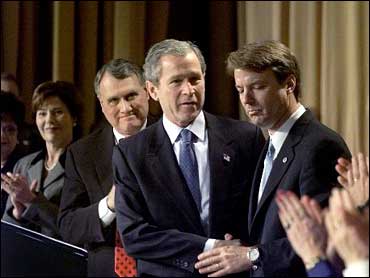 At the first National Prayer Breakfast since the Sept. 11 attacks, President Bush said the events of that day have led millions of Americans to prayer, CBS News Correspondent Mark Knoller reports.

"They have prayed for comfort in time of grief, for understanding in time of anger, for protection in time of uncertainty," Mr. Bush said. "Many, including me, have been on bended knee."

The president urged Americans of all faiths to turn to prayer as they struggle through "this time of testing" after the terrorist attacks.

"Every religion is welcomed in our country. All are practiced here. Many of our citizens profess no religion at all. Our country has never had an official faith. Yet we have all been witnesses, these past 21 weeks, to the power of faith to see us through the hurt and loss that has come on to the country," Mr. Bush said.

The breakfast is a 50-year tradition that brings lawmakers, foreign heads of state and spiritual leaders together in prayer. This year's event was filled with tributes to the heroes of the Sept. 11 attacks.

Ten representatives of the New York Fire Department were invited to the event, and Lisa Beamer addressed the group. She is the widow of Todd Beamer, 32, of Cranbury, N.J. He and a group of passengers on United Flight 93 apparently attacked the suicide hijackers in order to prevent their captors from crashing the plane into a building in Washington.

It went down instead in a field in western Pennsylvania, becoming the only one of four hijacked planes that did not take lives on the ground.

"The men and woman who charged into burning buildings to save others, those who fought the hijackers, were not confused about the difference between right and wrong," the president said. "They knew the difference. They knew their duty, and we know their sacrifice was not in vain."

Mr. Bush spoke of the "good that has come from the evil of Sept. 11," pointing to the surge in community spirit.

"Faith shows us the way to self-giving, to love our neighbors as we would want to be loved ourselves," said Mr. Bush, who has asked Congress to expand taxpayer-funded community service programs.

Urging Americans to be tolerant of each others' views, Mr. Bush said: "Respect for dignity of others can be found outside religion, just as intolerance is sometimes found within it."

Later in the day, Mr. Bush was embracing compromise legislation to help religious charities, although supporters have yet to resolve how they ill pay for the scaled-back initiative. The compromise would give new tax breaks to individuals and corporations, while abandoning the contentious effort to open new government programs to religious groups.